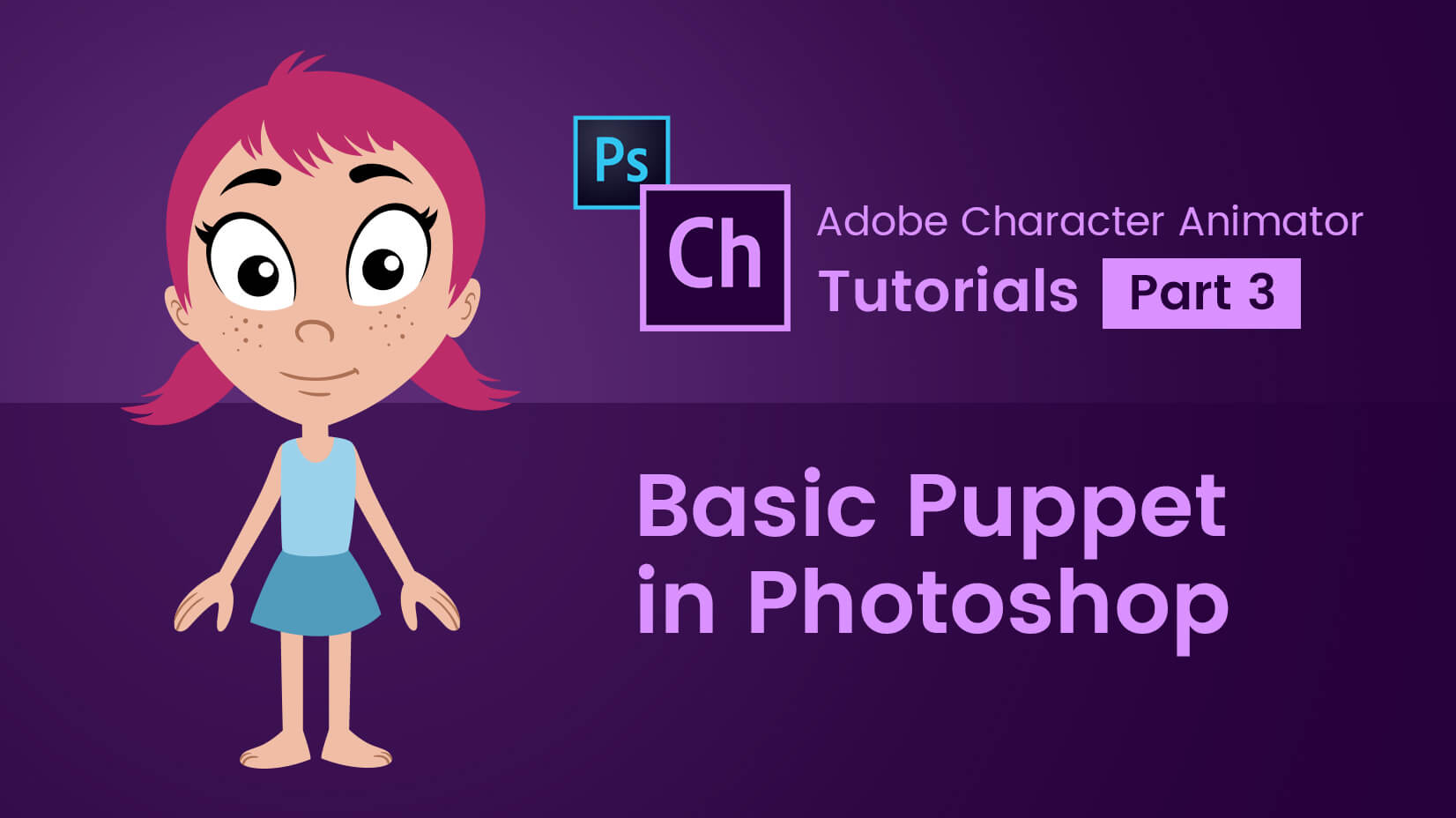 If you follow our tutorial series you know already what Adobe Character Animator is and how it works. Now we will learn how to create a fully functional character in Adobe Photoshop! One important thing you need to know is that when you upload your character in Character Animator, it is called a puppet. We will also use that term to describe a character that is being prepared to be used in CA.

In this article:
1. Naming & Structure
2. Automatically recognized facial features
2.1. The eyes
2.2. The eyebrows
2.3. The mouth

The way you name your layers and groups is very important because Character Animator uses these names to recognize the puppet’s body parts.

When working with Adobe Photoshop to create a puppet, it’s very important that you draw your puppet’s body parts in different layers. You don’t need every single part of your character on a separate layer though, only the ones that will move independently or have behaviors assigned by the program.

Let’s take this simple character and explore its layers! 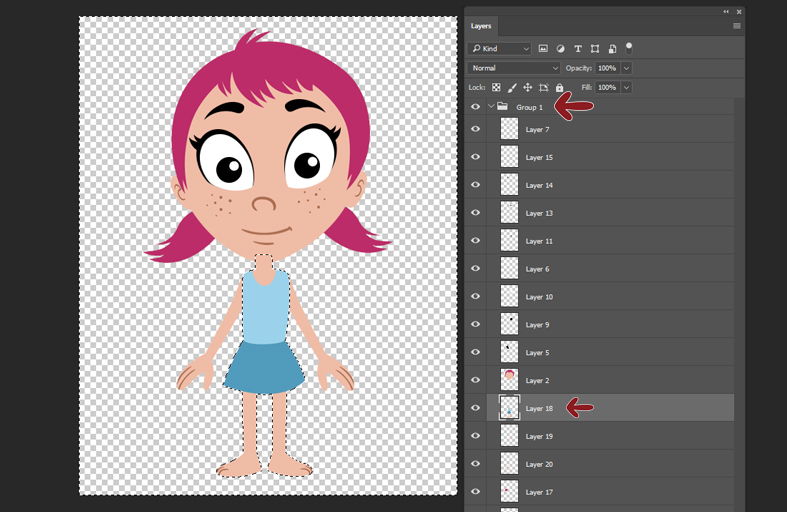 As you can see here, her torso and legs are drawn in one layer, they will not be assigned any movement or behaviors by the program. That goes also for the face shape, top hair, the ears, the nose and the freckles which are drawn together too.

The parts that need their own layer are: both pupils, both eyeballs, each of the eyelashes, both eyebrows, the mouth, both arms and in this case, both the pigtails.

You can see on the image that I’ve put all of this little girl’s layers in one unnamed group. It’s a good idea to name that big group with your character’s name or description (eg.: boy, child, woman, etc.)I will name it +Vicky , since her name is Vicky. But what is more important is the + symbol in front of the name.

The plus symbol: + is a crucial element of the naming of layers and groups in CA. It indicates that a layer or a group is Warp Independent, meaning it can be moved independently to the rest of the body.

We will use the + for other names soon but first let’s create a head and a body group. 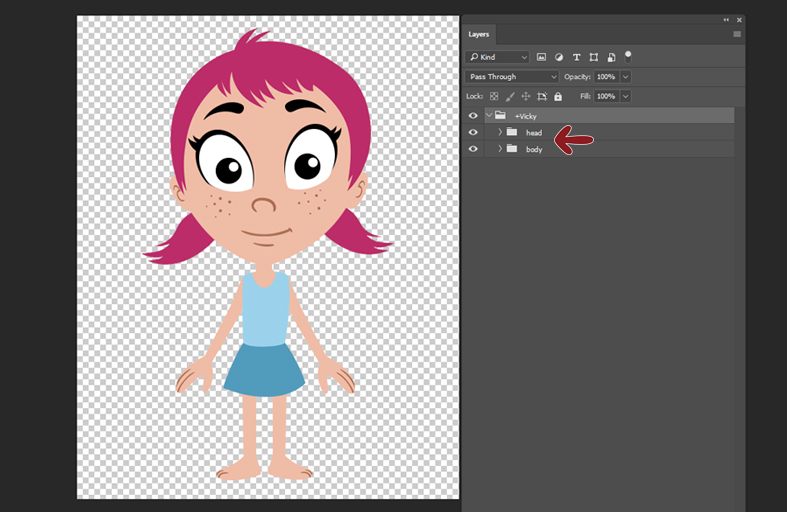 Character Animator recognizes the words head and body and assigns the appropriate behaviors accordingly. To avoid confusing the program, you should use these words only once – in these group names. This way CA will know these are the correct head and body of your puppet.

Next, let’s name the elements that we want to later assign behaviors to. 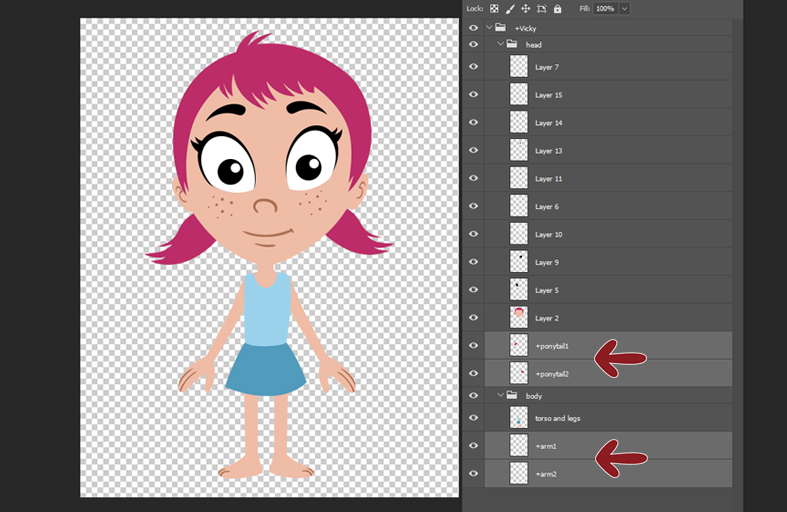 Here you can see the + symbol appearing again. Vicky’s arms now will be able to wave around independently.

I decided that later I want to assign dangle behavior to her pigtails, that is why they also have a + in front of their name.

Now, we will continue with naming and arranging the facial features of the puppet that are automatically recognized by Character Animator. They have their very specific behaviors, that is why they get their own section.

These are the eyebrows, the pupils, the blinking and the mouth shapes. The amazing thing about CA, is that if you name and arrange these elements correctly the program will animate them for you. In few quick steps you can bring life to your puppet’s still face! Let’s see how!

We will start with the eyes. You need to group them by left and right, in each group you should have a pupil, an eyeball and the eyelashes. Name them Left Eye and Right Eye, according to your puppet’s body, not your screen. Then name each pupil +Left Pupil and +Right Pupil. Don’t forget the + in front of the pupils names, that way your character will be able to look around. 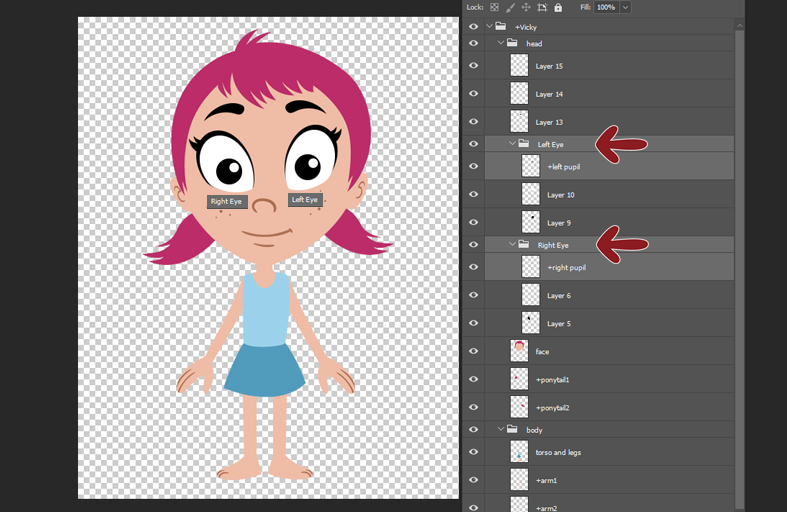 You should name the white parts (the eyeballs) of the eye Left Pupil Range and Right Pupil Range. CA recognizes the elements with these names as boundaries for the pupils of the puppet. Vicky also has eyelashes but they are a decorative element, they have no function but aesthetic. So I can name them whatever I want. All the other names we talk about in this section are recognized by the program that is why it is important to use them correctly and use them only once. 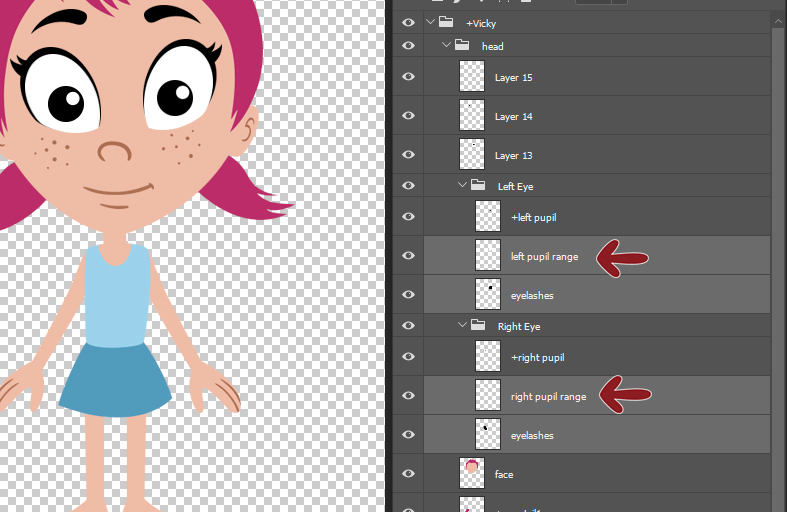 Next it’s time for the blinking eyelids! I will create eyelids for Vicky on new layers and name them Left Blink and Right Blink. Remember! Every time you blink Character Animator will show the closed eyelids of your puppet and make everything else that is in the same group as the eyelids invisible . That is why the eyelids of your puppet need to be in the same group where their eyes are. Like this: 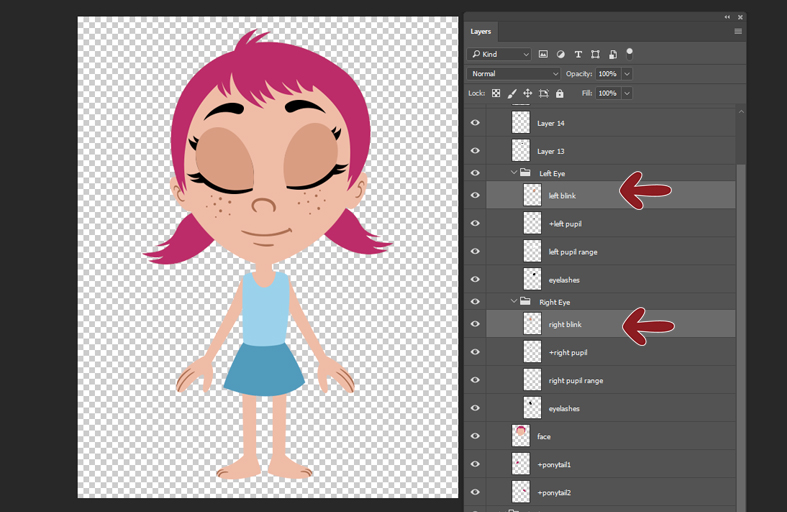 I will leave the blink groups invisible and move on to the eyebrows. Here we see again the + symbol. As you can already guess you should name them +Left Eyebrow and +Right Eyebrow. And these are the last elements where we will use the + symbol. Next is the mouth, but first let’s see how everything looks so far. 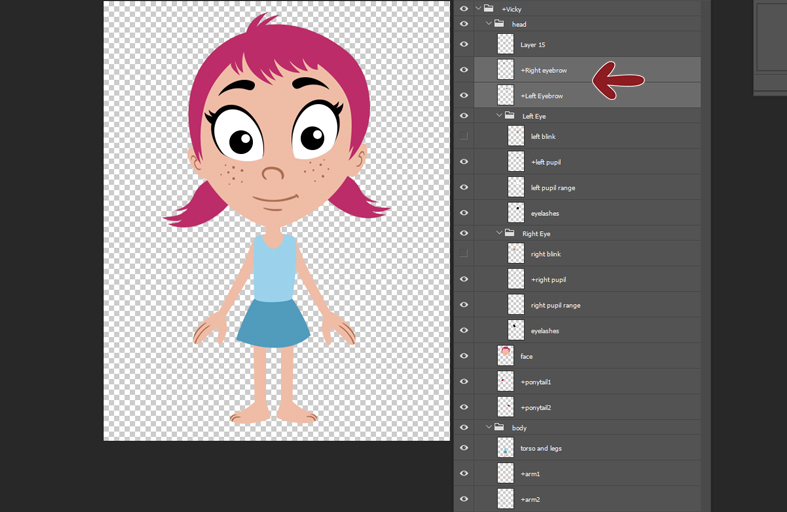 As I mentioned earlier the mouth shapes are the only element in the puppet that are generated according to sound. But that does not mean that the program generates mouth shapes by itself. These are for us to draw first! 🙂 There are 14 different mouth shapes that every fully functional puppet needs to have. For the sake of this tutorial let’s say we already have the 14 mouths and explore each of them.

When you have all your mouth shapes you should put them all in a group named Mouth. Here you can see how the mouth shapes are presented in the program. They are there as an example how your puppet mouth should look and how they should be named. Below you can see my versions. 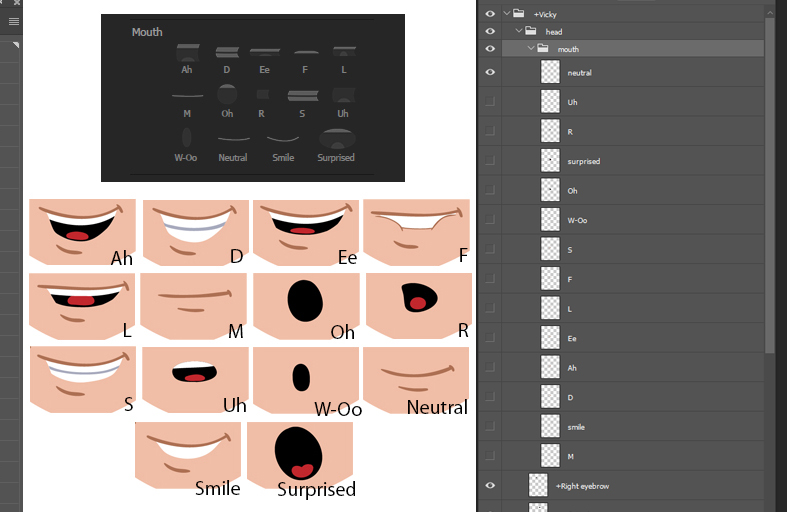 And that’s it! Now you have a fully functional basic puppet in Adobe Photoshop!

Stay tuned to our tutorial series to learn how to set up and rig a character!