5 Logo Redesigns Gone Wrong & How to Avoid The Same Mistake

Even the most thoroughly researched and well-intentioned logo redesign can come with a few risks: loss of brand recognition, accidentally offending people, and putting off loyal customers who no longer connect with your visual brand. To help companies avoid making common logo redesign mistakes, we’ve put together a list of logo redesigns gone wrong and the lessons you can learn from each.

You can thank Gap for popularizing the casual aesthetic that defined the mid-to-late ’90s. The iconic clothing store offered stylish basics and classic blue jeans that looked like they came straight off the set of “Friends.” But the Gap’s popularity came at a cost. As the market became saturated with the brand’s pared-down, laid back styles, the style that defined the clothing brand began to limit its growth.

When sales started slumping in the 2000s, Gap decided it was time to freshen up their image for the new millennium. So, in 2010, they rolled out a new logo, symbolizing their transition beyond khakis and beige turtlenecks. Stripped of its serifs and capital letters, the new logo was a stunning departure from their long-established identity. It was also a stunning failure.

The updated design was more than just a shock for fans of the brand. It felt like a betrayal. For customers who relied on Gap for everyday basics, the original logo was iconic, memorable, and (most importantly) familiar. Gap’s tone-deaf rebranding effort hit customers on a personal level and they revolted. There was such an uproar that the company reverted back to the old logo that same week.

Not only did the company ignore the basic rules of branding and brand identity, but they also ignored brand launch and communication protocols. And their customers didn’t let them get away with it.

The Lesson: Keep your ego in check, and don’t forget about what your customers love about you. If you’re going to risk upsetting that, make sure that you communicate clearly why you’re making the change. A logo redesign shouldn’t just be about your company, but about your customers as well.

After a while spent working against a nearly identical business name and logo to Buzzfeed behemoth Tasty, Tastemade finally decided it was time to distinguish their brand from their primary competitor.

So, the food and lifestyle company cooked up a new logo, switching their script font for a streamlined, all-caps typeface. They also threw in a stylized “T,” which was described by the company’s COO as a “twisted active shape” to show that the brand is “always evolving.”

But based on the reactions of baffled fans on social media, much of that intention was lost in translation. Commenters on Tastemade’s social media mistook the awkward symbol for everything from a misshapen S, to an hourglass, to a drop of saliva.

The Lesson: Symbols aren’t always universal. While you might see a spoon or chef’s hat, your customers might not. Surveying your customers beforehand can help to bridge this communication gap, and prevent any half-baked logo design ideas from reaching your audience.

After moonlighting as the letter “L” for three decades, the iconic bent staple has finally punched out from the Staples logo.

The global office supply giant rolled out its sleek new lowercase design in the spring of 2019. The revamp reflects Staples’ shift away from serving consumers, toward working with companies directly to fulfill their business needs—including the conversion of some of its retail spaces into coworking spaces. A shift in business strategy was almost inevitable for Staples, as it aims to remain relevant in a world where Amazon can sell you all the staples you could ever need.

While changing up their brand identity seems like a natural extension of Staples’ updated business strategy and the new logo is inoffensive enough, the logo redesign still has some issues. So what’s the problem here?

The Lesson: Consistency is key with logos. Think of your customers first, and don’t confuse them by diluting your brand identity.

With a few years of consistent controversy surrounding its environmental impact and the working conditions of its laborers, fast-fashion chain Zara knew it was time for a makeover.

So, in early 2019, they stitched up a new logo using a sophisticated Didone typeface familiar to readers of fashion magazines. This was no coincidence — Zara’s artistic director and founder of Baron and Baron, who did Zara’s rebrand, used a similar font to overhaul fashion magazine Harper’s Bazaar in the 1990s.

The use of an elegant serif font bucks the current, almost pathological obsession with minimalism in design. This is all well and good for Zara’s image remodeling efforts — except for the fact they inexplicably squished their logo to oblivion.

Instead of reflecting the brand’s easygoing, trendy vibe, the close-quarters kerning looks like somebody had too much fun in Photoshop. While layered or stacked type can add visual interest, letters that overlap to the point of suffocation can become difficult to read and don’t scale well. As mobile ecommerce continues to grow, this kind of unscalable design won’t work.

The Lesson: No matter how stylish your font and typography are, if your customers can’t read them, you’re not getting your brand’s message across.

It’s no secret that the once-dominant retail dinosaur, Sears, has been seriously struggling to keep up with its ecommerce-adopting competitors these past few years. Let’s be honest, the 126-year-old brand’s expansive brick and mortar presence seems somewhat anachronistic in this day of doorstep deliveries.

The company finally admitted defeat when it filed for bankruptcy in 2018, shuttering hundreds of their Sears and Kmart stores. Needless to say, Sears was in desperate need of an image overhaul before it got shelved entirely.

In 2019, the company rolled out a brand new logo — but it didn’t go down well for Sears. The logo was immediately slammed by designers and the public alike.

While the company described their design as  “represent[ing] both home and heart, this shape also conveys motion through an infinity loop, reminiscent of one getting their arms around both home and life.” Most people only saw one thing: the Airbnb logo.

Aside from looking like an Airbnb knockoff, the new logo has a few other design sins working against it. Perhaps the most grievous is the new gradient logo symbol, whose shift from turquoise to green is almost impossible to detect on most screens. The gradient also manages to clash with the brand’s font color—another strike against Sears’ attempt at reinvention.

The Lesson: Make sure your logo doesn’t look like anyone else’s, even if they’re not in the same industry as you. And before you go with a gradient, consider how visible and visually pleasing your color combination is.

You should not be scared of logo redesign, especially when your logo looks outdated and somehow falls behind the latest logo design trends 2020. But the process of redesigning should be really well-planned and considered in order to avoid the most common mistakes that companies have made.

We hope we’ve been useful with this topic. Furthermore, would you like to get inspired by: 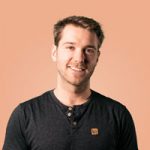 Dawson Whitfield is the CEO and Founder of Looka, an AI-powered logo maker and graphic design platform that provides business owners with a quick and affordable way to create a beautiful brand.