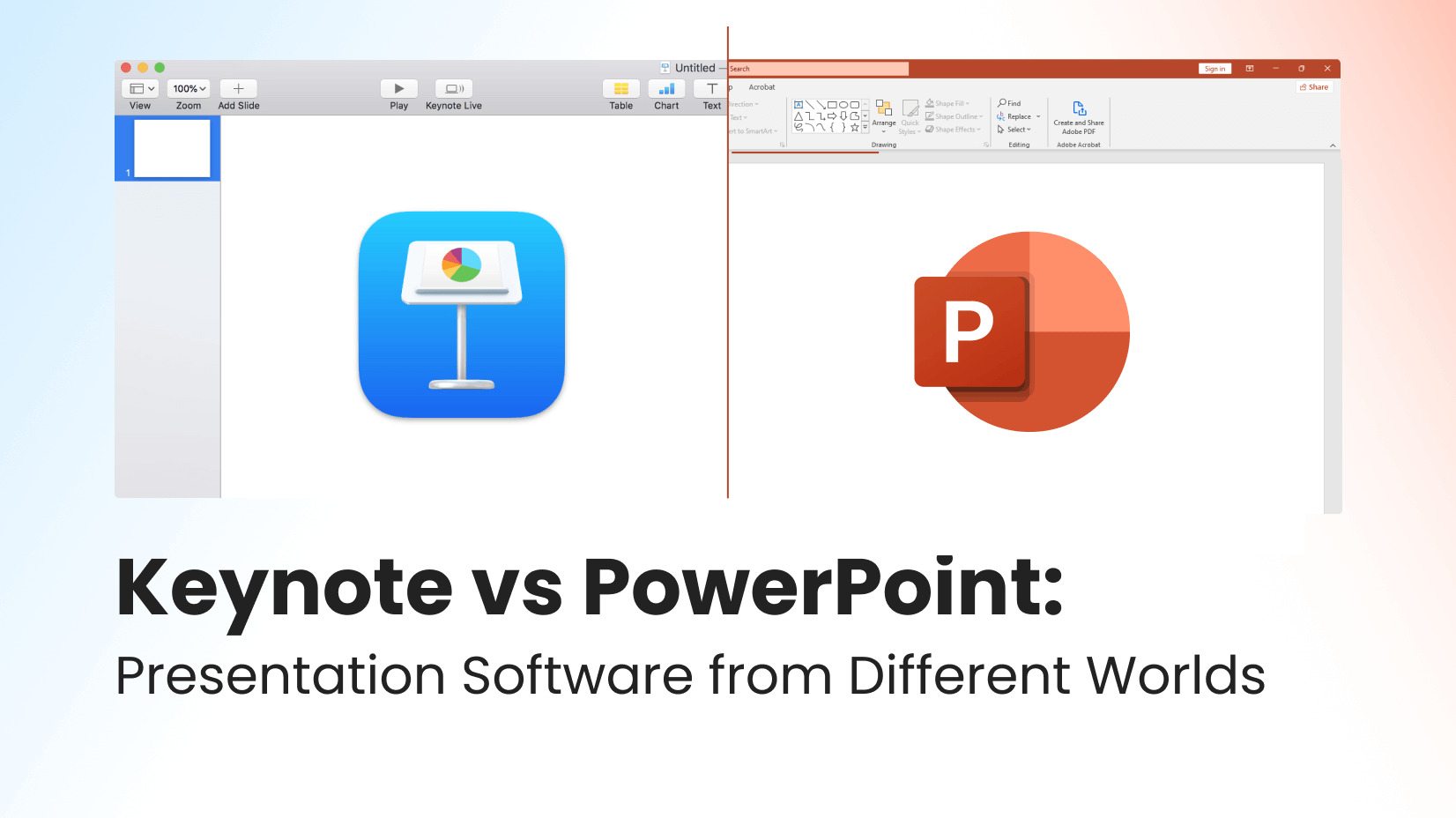 When we compare presentation software, it is usually PowerPoint and the rest. Or at least it was. Over the last few years, Google Slides challenged PowerPoint for the throne. And it managed to steal market share. But what about Apple? If someone has underestimated them, they have already suffered. Apple has turned from a premium technology manufacturer to a solid software solution provider.

Apple’s version of PowerPoint has developed over the years. But to what extent? Is Keynote vs PowerPoint a comparison with a clear winner, or will we see a comparison between two equals? Let’s see.

Both apps are among the best presentation tools in the world. PowerPoint appears to be ten times more popular than Keynote according to Google Trends (graph below). But can we conclude Microsoft tops Apple’s software or Keynote is a worthy rival? Let’s find out. 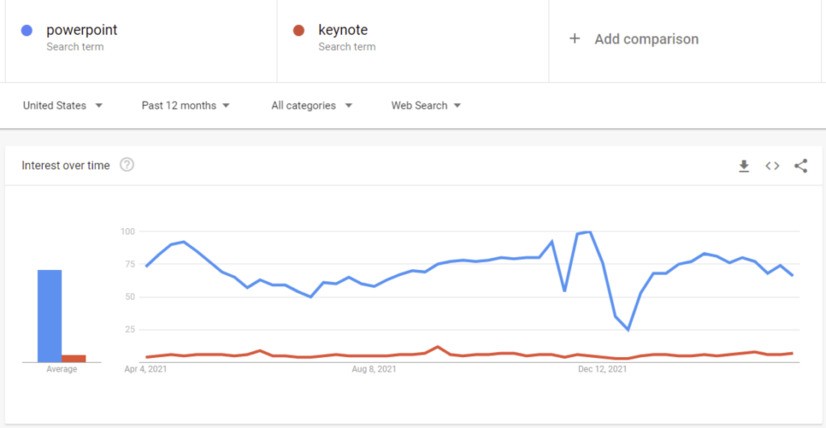 What is the Keynote app? It is a product developed by Apple. It aims to provide a straightforward, stylish, and easy-to-use solution to all Mac, iPad, and iPhone users. It has a very sleek and intuitive design. It has plenty of animations and templates, and you can quickly come up with original designs for your presentations that will look professional and sophisticated.

PowerPoint is a legacy name in the industry, and it has been on the market since 1987. The irony? It was made to work on Macintosh, but after the acquisition from Microsoft, it has quickly turned into the most used presentation software in the world and has been a dominant player ever since. There are over 500 million users, and each day, more than 35 million presentations are given life!

Presentation software has to be accessible, in order to be used. Let’s see how Keynote versus PowerPoint compares here.

Apple has ensured that whether you use an iPhone, iPad, or Mac, you can easily create and edit presentations, as it’s well optimized for all macOS/iOS devices

But it’s not all perfect. While Keynote works smoothly on all Apple devices, it doesn’t have an app for Windows and Android, meaning you will be limited to macOS/iOS-only.

PowerPoint is made to work on all devices – desktop computers, Mac, iOS, and Android. But keep in mind that PowerPoint is designed to be a desktop app so it will work best in such an environment.

Over the last few years, Microsoft has actually invested a lot in OneDrive and as a result, you can now collaborate with colleagues on your presentations in PowerPoint.

Keynote is a free desktop app that can be stored and edited in iCloud. Depending on your needs, you can save your presentation on the cloud or on your computer. As discussed in our Google Slides vs Keynote comparison, iCloud offers free 5GB of cloud storage. To get extra, you need to pay subscription fees:

PowerPoint files can also be saved on both the device and in the cloud. OneDrive also comes with 5GB of free storage space. You can purchase only drive space, or drive space + MS Office (standard plan). The family plan is for up to 6 users (~$1.67/user) and 1TB cloud space/user. One-off PowerPoint-only purchase costs $159.99.

Ease of use is among the most vital details of working with presentation software. It has to offer a quick onboarding time, otherwise many people would refuse to continue using the program.

Apple has put a lot of work into Keynote and it is visible. It looks great, it is very beginner-friendly and one can start their first project and finish it in no time. You would definitely like Keynote a bit more if you’re a novice user since it is very easy to learn and use for your presentations.

PowerPoint is made for business people, which is evident from the variety of features. However, that wide range of options can be overwhelming for starters. The program has a steep learning curve and if you’re not familiar with it, you might find it hard to get the most of the software.

Working with people on a presentation is not a luxury anymore. It’s rather a necessity. Any good presentation program should offer a way to collaborate with others, in order to come up with the best possible outcome.

Keynote has an option to be added to iCloud, thus you can collaborate with your peers and colleagues. While anyone can create an iCloud account, the person who creates the presentation should have an Apple device, as currently, Keynote is not available on Windows computers or Android devices which is certainly a problem.

PowerPoint has been a desktop app from the beginning. But Microsoft invested a lot to make it comparable with Google Slides for online performance. Now, you can collaborate with others in OneDrive, and make edits at the same time. We have to say PowerPoint has gone a long way from being desktop-only to being a viable solution for collabs.

Both programs have a lot to offer. And this is why they are ranking so high everywhere.

Keynote has outstanding themes and amazing elements – lots of them. The templates, even the simple ones, look sophisticated. Design-wise, Keynote looks much better than PowerPoint but we have to mention there are much fewer templates available for Keynote. But let’s not worry too much, though – there are many marketplaces where you can find templates for Keynote – including free and paid ones. Bear in mind that freebies for Apple are not that common.

PowerPoint is a market leader for more than three decades and has consistently improved over time. Today, the program offers more themes, more elements, more animations – more of everything! Тhe new designs are very captivating. There is a photo editor tool, too. PowerPoint trumps every other program in theme and plugin selection online. You can find literally millions of different themes, fonts, and other elements – both paid and free.

Usability comes at the forefront if you would like to get the most out of each program. Limitations and capabilities are important parts of the software and knowing them in advance will help you make a quicker decision.

Keynote is a superb presentation program for Apple devices. Whether you’re a Mac user or would like to present something from your iPad or iPhone, it is perfectly fine. Apple takes the scribble feature to the next level and makes it very easy for people who can draw to maximize the potential of their presentation. Keynote vs PowerPoint is not a battle worth fighting from a design standpoint. But being Apple-first has its drawback – PC users will find it impossible to work on the platform, and even if they can edit the presentation from iCloud, it’s not going to be the best experience possible.

Microsoft PowerPoint is hard to use at first but it is arguably the most advanced presentation software, as there are tons of features that you can work with. Business charts are top of the league and the ability to use data from Excel and make it a perfect infographic is what makes many business people invest a lot into the program. It’s also very reliable, as the program has matured over the decades. It also has plenty of import and export formats available and definitely more than Keynote. PowerPoint also supports XPS – a format that doesn’t allow anyone but the source to edit.

✅ On Apple devices – Keynote has been made to work on Apple devices. The whole focus of the program is aimed at delivering outstanding performance in that ecosystem. If you have an Apple device, you’d find that PowerPoint has some shortcomings while your user experience with Keynote will be a lot better at times.

✅ It’s free to use – another solid argument is that Keynote is free forever. In comparison, the standard Microsoft 365 plan starts at $12.50/mo and for a company of 10 people, you should pay $1,500 annually or buy 10 perpetual PowerPoint licenses for approximately $1,600.

✅ Being more creative – we already mentioned that Keynote has the better default themes. But you can create better pages, add a lot of text, and really make something magical happen with Keynote. If you can draw, that’s an even bigger benefit. For creative Apple users, Keynote has the upper hand.

✅ For desktop computers – PowerPoint is made by Microsoft which also owns Windows OS. This means that the software and operation system will work effortlessly. On top of that, the Keynote app cannot be installed on Windows and Android devices which makes it impossible to even compare the performance of these two in such circumstances.

✅ For powerful charts – most business users can say that PowerPoint offers exceptional infographics and can work with data much better than anything else on the market. Data visualization is on a whole new level in PowerPoint and that makes the program the perfect solution for displaying charts.

✅ Teachers and students – Microsoft has been working with schools and universities for a long time now, and it provides eligible institutions a free license of its Office 365 Education. All necessary programs from MS Office are included, they are free and fully functional.

Keynote vs PowerPoint is one of the most intriguing comparisons when it comes to presentation programs. It opposes two arch-rivals – Microsoft and Apple. Both companies are known to deliver outstanding software but which one can be crowned as the best? Our unbiased opinion says PowerPoint is by far the most feature-rich presentation software. It’s a powerhouse and the fact that people talk about “PowerPoint’s alternatives” is a compliment alone.

But for Mac users who want to create more than decent presentations, enjoy a very user-friendly UI, and pay nothing, Keynote will be a more than adequate alternative.

If you found our comparison between Keynote and PowerPoint useful, you can also have a look at some of our other articles: