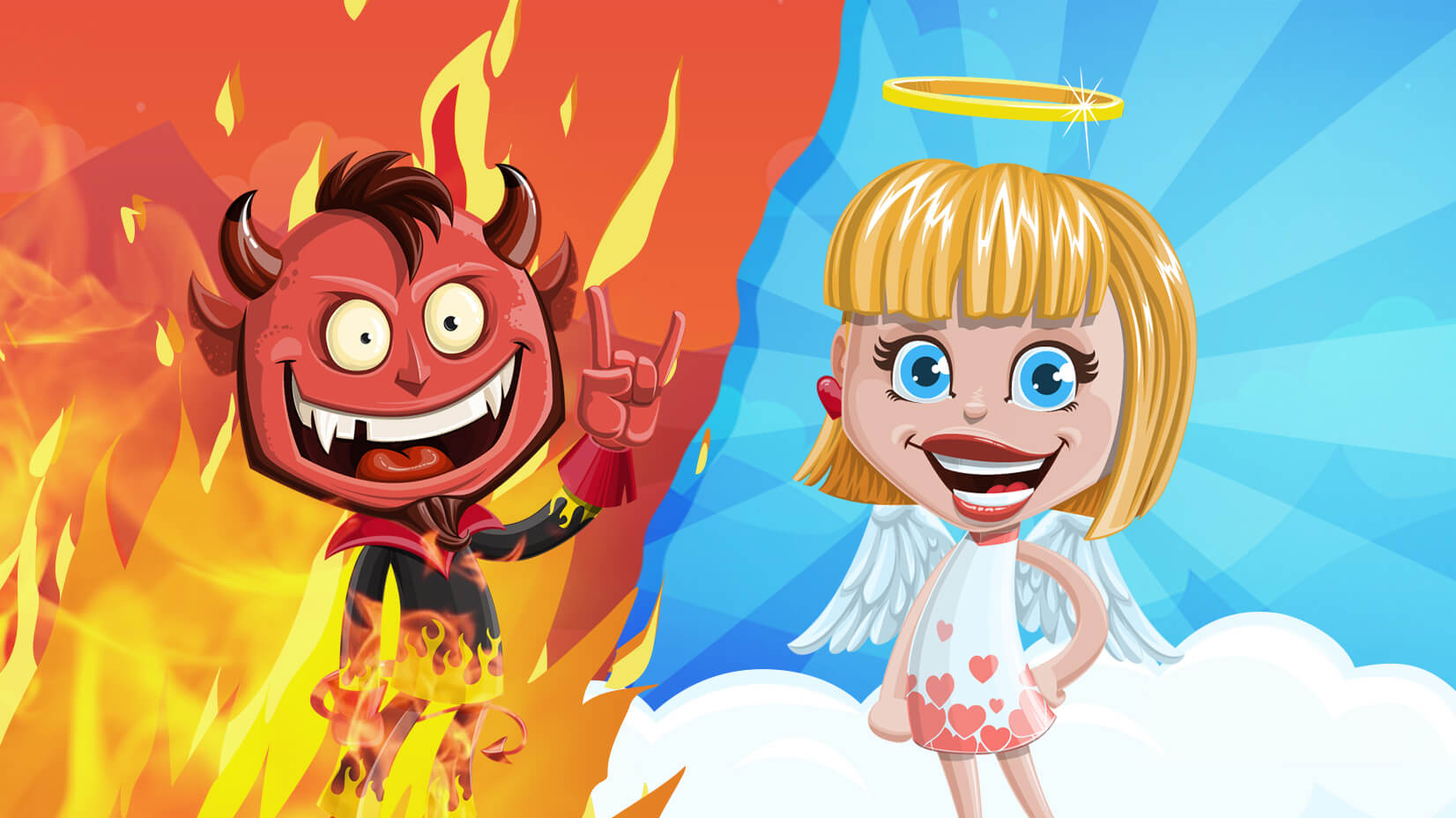 Angels and demons character design is one of the most treated subjects throughout the entire Art history. Their juxtaposition (the contrast between the 2) is often a favorite theme and intriguing topic for artists. And let’s face it, almost everyone loves to relate themselves to these enchanting characters and is “cheering” for one of the “teams”.

What do angel and demon mean?

Let’s start with throwing some light on the etymology (origin) of the words angel and demon:

-Hi, my name is Demon. – Hello, Demon. Well, did you know that your name originates from the Greek word daimon, meaning deity and genius, but somehow, along the way, Latin put a bit of negative nuance to it and shifted to daemonium – a lesser, evil spirit? -Oh… That’s bad.

-Hi, my name is Angel. –Hello, Angel. Did you know, that your name comes from the Greek angelos, meaning messenger? -Yes, I know. I delivered this message. -Ah.. Ok.

There are many similar angels and demons spirit beings found within cultures around the globe. The history of angels and demons dates long before Christianity and Christian artists were often inspired by pagan creatures when creating their own creatures. Many cultures have gods with wings, or gods in the body of birds, so it was natural to attach wings to human characters and thus, create a connection between heaven, the spiritual world, and the earth. This explains why wings are so often used for creating both angels and demons characters.

Let’s see how angels and demons were imagined in different cultures:

In pagan beliefs, many creatures can easily carry the characteristics of an angel – such as fairies and wood spirits. To pagan culture, all these creatures are highly evolved souls who act as guardians, messengers to our world. Pagans had also many worships for gods with animalistic forms – goats, snakes, ravens, and other. One of the best-known worships of Pagan culture is the one for the “Horned God”. Later, these animals and “spirits” were labeled as evil by Christianity, or as demons.

In the left part of the picture, you can see an Assyrian angel from the ancient city of Khorsabad, dating back to 721-705 BC. Here we can see the combination between human form and wings. If you look at the art of this time, you will notice that the princes from the palace didn’t have wings. This comes to underline the idea, that only creatures of higher spirit were drawn and sculpted with wings. Pazuzu (on the right) was the king of the demons of the winds. Pazuzu has the body of a man, the head of a lion or dog, the tail of a scorpion, two pairs of wings, and the talons of an eagle. 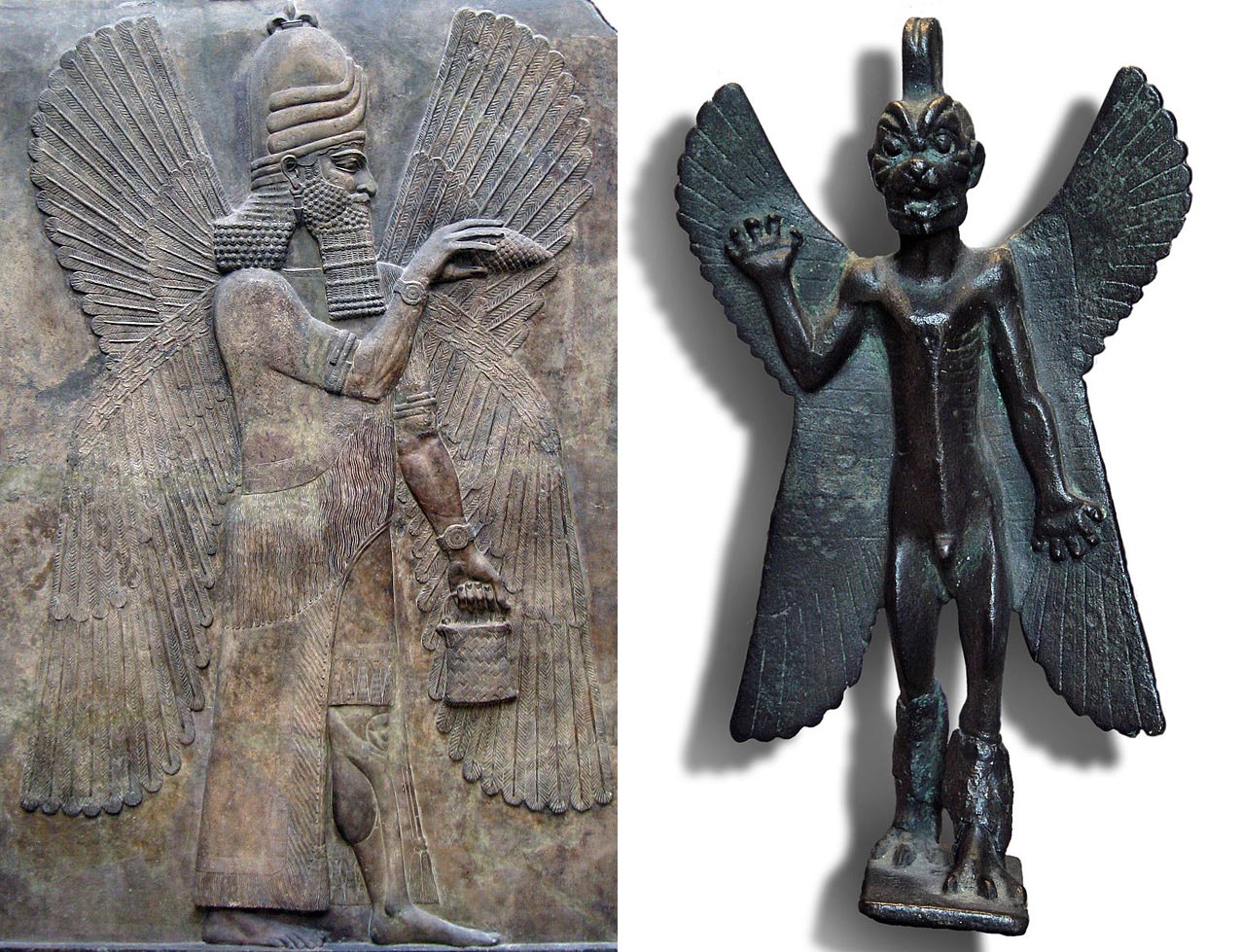 Buddhists imagined Devas to be invisible to the eye, non-human creatures and the name means “shining ones”. People believed that devas are more powerful, longer-lived, and, in general, much happier than humans. On the other hand, Asuras originally meant a supernatural spirit, either good or bad – they often challenged various aspects of the Gods too. It appears Buddhist culture is very frugal when it comes to evil and demon characters. 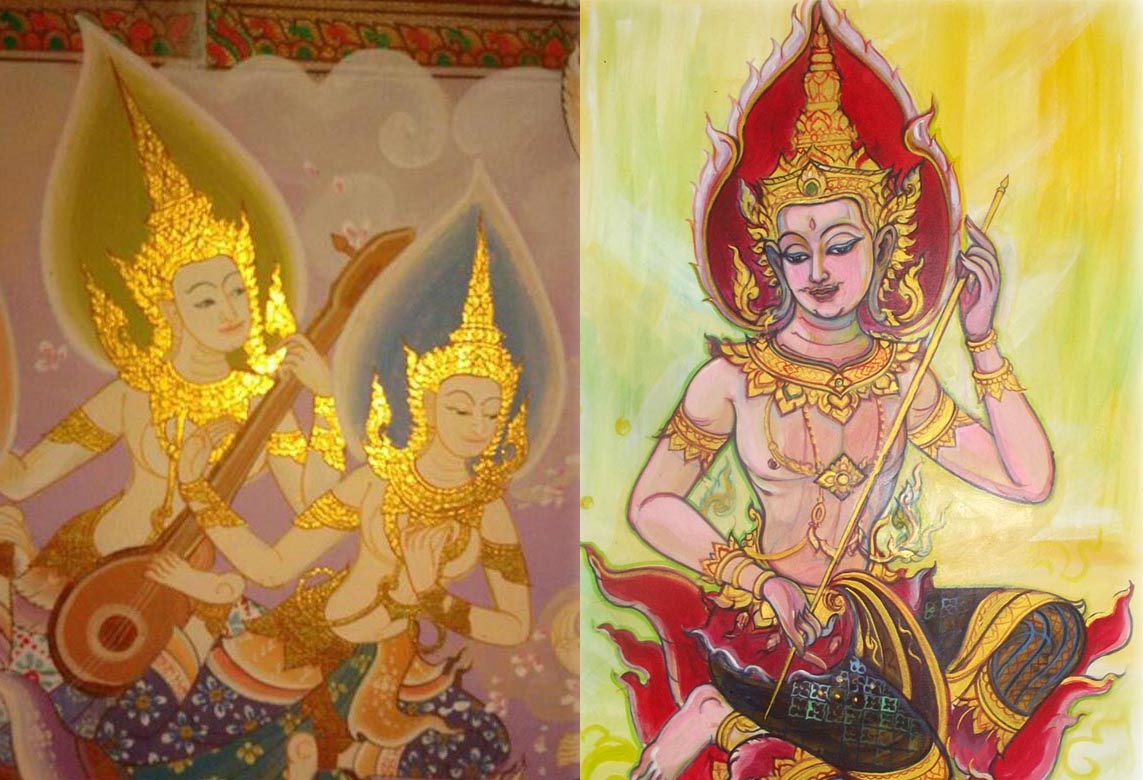 The Norse mythology – Valkyrie and… Loki

Angels’ predecessors in Western culture were the Valkyries. They are imagined as winged creatures, who are taking dead warriors’ souls to the great hall of Valhalla (heaven). Mythology describes them as shield maidens with golden hair and snowy arms, who served to the heroes in Valhalla. Again, in Norse mythology, there aren’t many evil spirits and demons, and one of the most recognized characters, that could be considered evil, is Loki. Like Prometheus, Loki is considered a god of fire, he often changes shape and sex, and sometimes helps the gods, but at other times causes trouble. He has horns too! His wife is a demon of sorrow, his father – is a giant, even his child, a dog/wolf is a demon of destruction. What a family!

Many of the Christian characters are inspired by Pagan cultures. An interesting fact is, that in the earliest Christian images, the angel characters didn’t have wings or halo and the church had to allow artists to draw them with these. Not much changed in the Medieval age, where the church still made the rules for drawing angel characters (left picture). Furthermore, the artists didn’t have much knowledge about the human body, and this is the main reason why the figures looked flat. Later, in Renaissance (from French – rebirth) age, artists gained significant knowledge about perspective in drawing, human anatomy, color, and light and the characters became more realistic (middle). With time, compositions got more complicated, and so did angels’ characters. We can notice that slight hints of gender appeared in them too (right). 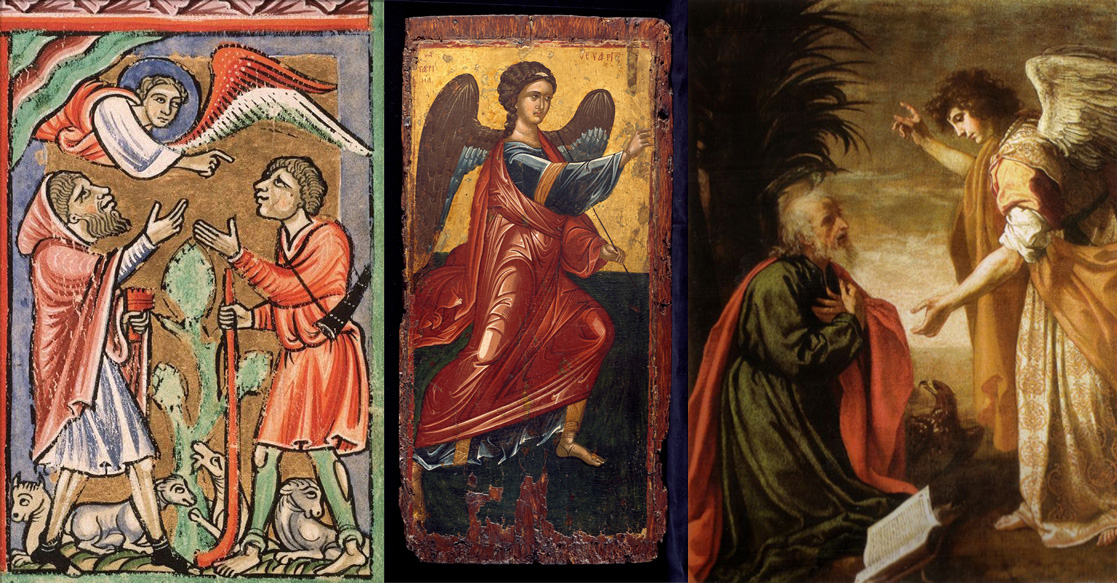 Demons’ drawings through these years were horrifying, ugly, looking like animal creatures. Slowly, with time, they got more humanized and adopted many human features:

We’ve selected some beautiful angels and demons character designs, created by Behance artists. Check out their Behance projects and enjoy their skill and creativity by clicking on the images: 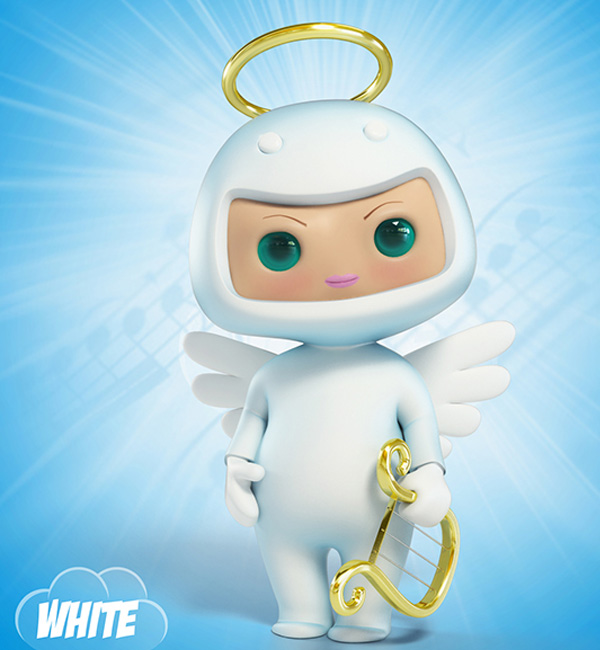 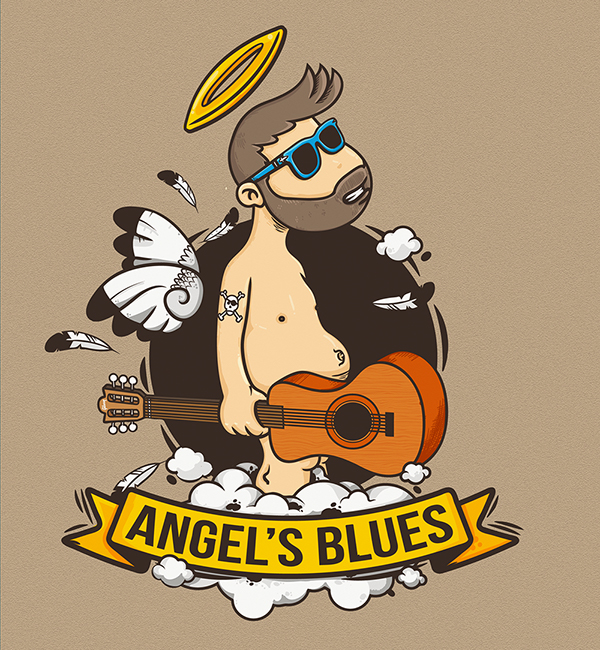 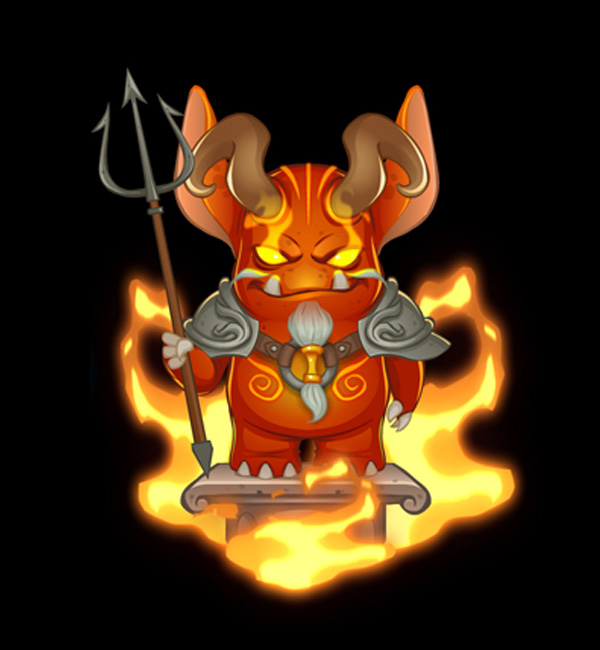 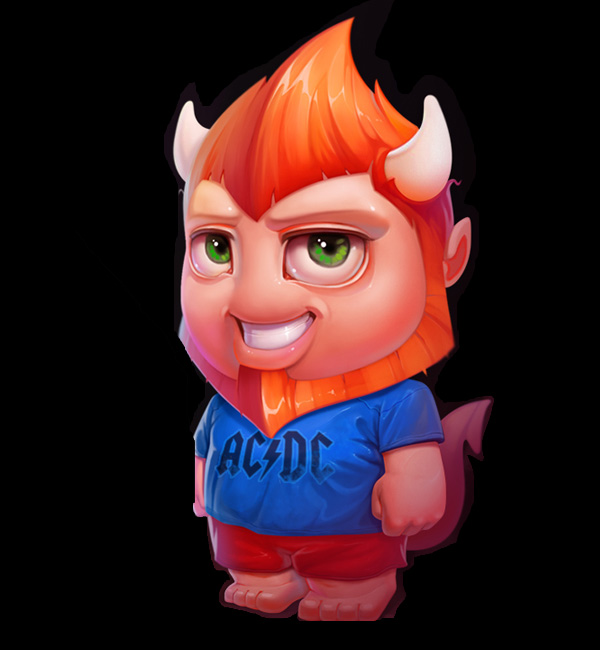 Our angels and demons inspired art

No wonder we are inspired by this theme too! In the following section, you can see the latest angels and demons character designs from our house.

Are you curious about what goes on in a creative mind and what’s the designer’s workflow? Here are some recipes from our kitchen:

We start with research…

The first stage in any design process is to make your research! Collecting reference and inspiration photos always help in boosting creativity and knowing your topic well. It allows your imagination to come up with far more fruitful ideas, rather than sitting with a blank sheet of paper and trying to create something. Sometimes, coffee comes first. But in our case, inspiration comes first, or at least, we serve it with the coffee!

After doing the research, the sketching stage begins. Usually, designers at our house, produce from 3 to 9 fast concepts of a character, from which they evaluate and pick the best. Here you can see angels and demons’ character design sketches, who made it to the final cut. After cleaning up the line, we apply little color underneath the black outline, so the artist can get an overall feel for color and shapes. At last, little added white highlights are a nice detail and help to see the character as a volume. We often work on toned paper – it is a nice method to make the colors pop. Sometimes white backgrounds are too bright and distracting.

Here are also some examples of grown-up angels and demons’ character designs. Can you see how the designer is trying to convey different personality traits by using different body and face shapes and clothing? If you’d like to learn a bit more about using shapes and sizes to convey a character’s personality, check out our article devoted to this topic. 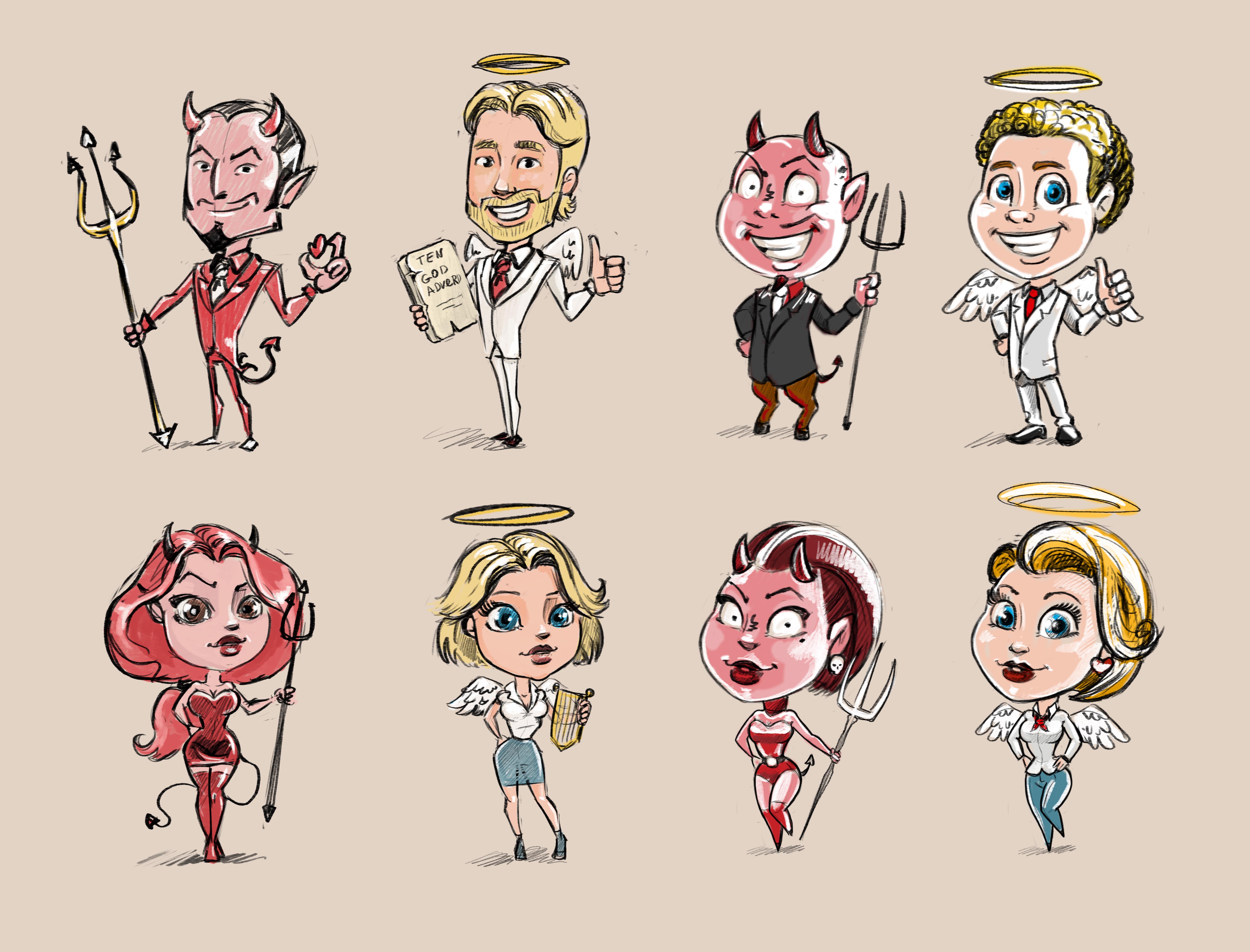 … Finally – time for color and details

When our design team is happy with the sketches, we start the vectorizing stage. The designer starts refining the shapes and begins filling them with color in adobe illustrator. A preferred design style of our team is flat design – simple base color, light source, and shadow. No gradients. In the final stage we add some little highlights and make a simple, but yet, interesting and bright background: 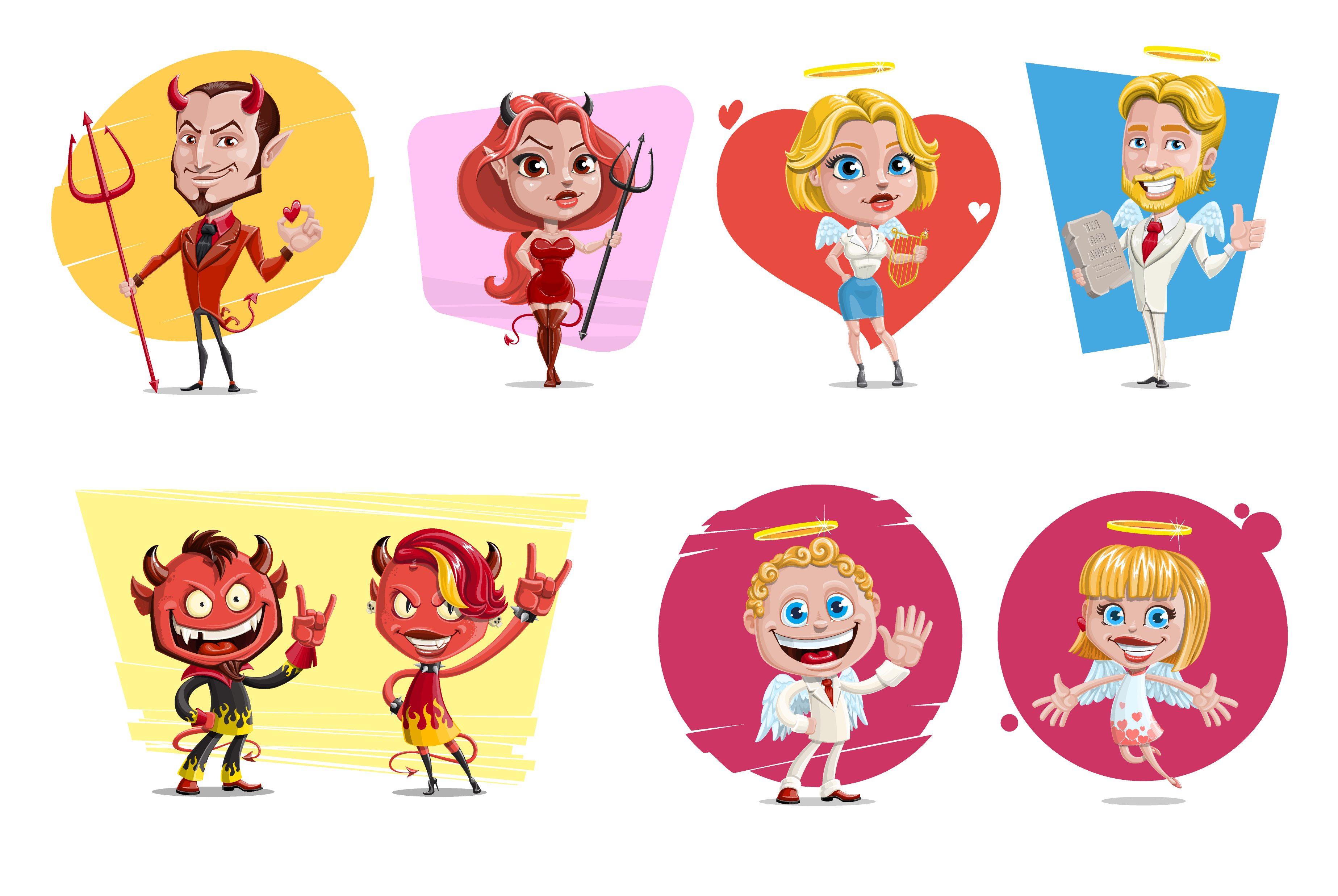 You can see the process videos of creating our angels and demons character design on our YouTube channel:

If you are curious, you can check the completed angel and devil characters with a complete set of action poses on our website.

We hope that you learned something about angels and demons’ character design and that we inspired you! Drop us a comment below and tell us if you like this kind of content and if it is useful for you. Or, simply tell us, what’s the topic you want to learn more about… and we will create an article for you!