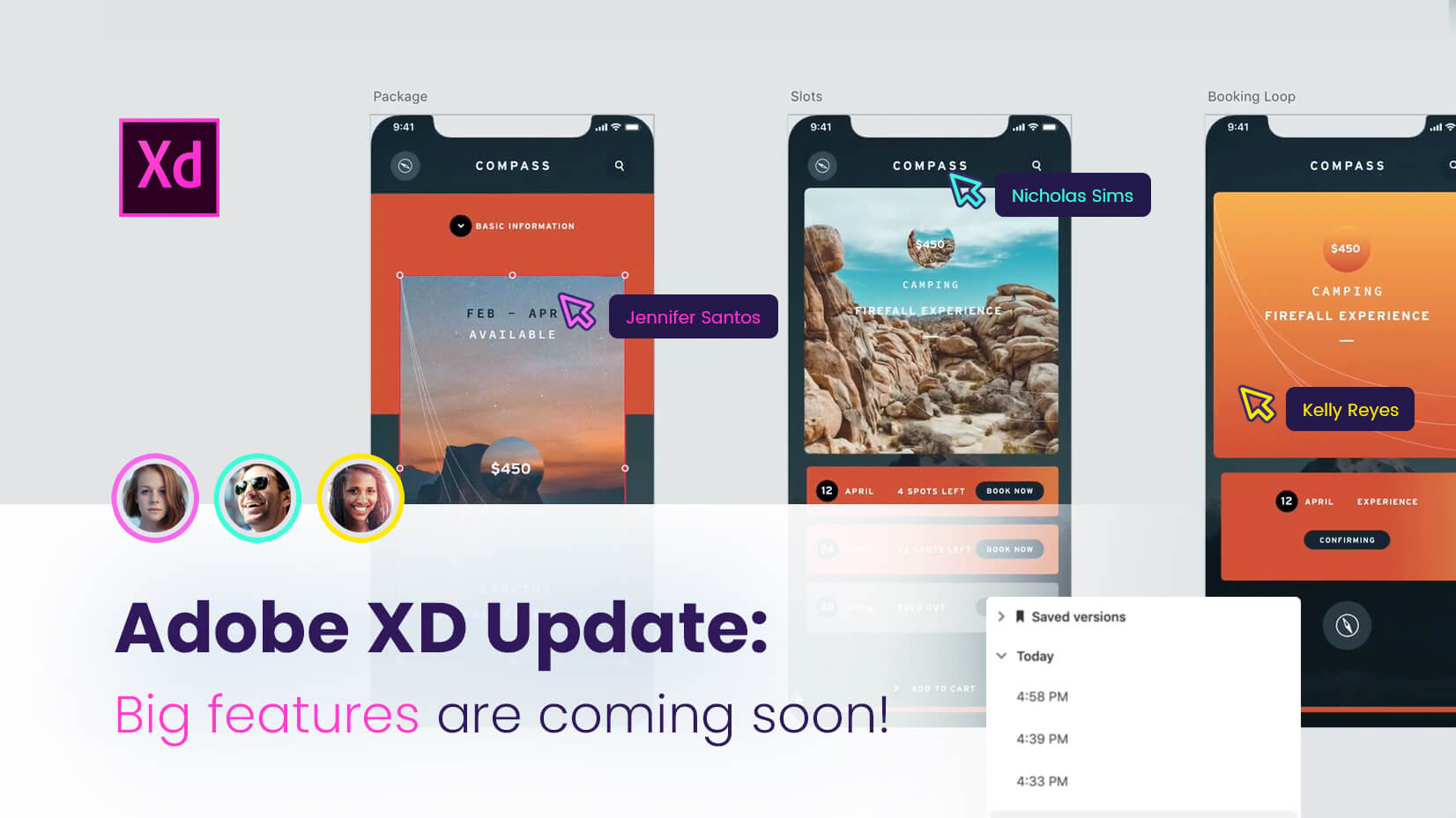 Update 2022: The latest version of Adobe XD includes a lot of new features, take a look at our tutorials to master Adobe XD in 2022.

Adobe has recently posted really exciting news about upcoming updates in Adobe XD and we can’t wait to spread the word!

Adobe XD, the software for building app and web design prototypes which has been on the market for a couple of years now, has become favorite to many creatives. With its intuitive interface and handy features, the software is gaining more and more speed, of course with the help of community that doesn’t stop giving Adobe feedback. Currently, Adobe has released over 20 major updates and another major one is on its way.

Coediting and versioning will soon be a thing in Adobe XD!

The one thing that has been missing and has been kind of a bummer to designers is the lack of the opportunity to collaborate in real-time with teammate designers. Well, Adobe is now working on a major update that will fix this issue.

Adobe aims to develop a shareable design system which fosters seamless collaboration in real-time. This means, very soon your whole team will be able to work on the same document at the same time with each update appearing in real-time. Exciting, isn’t it?

According to Adobe, coediting will also come with versioning. This will allow design team members to easily access and review all previous versions of the document they are working on.

Furthermore, in the long term, the team of Adobe promises to extend the shareable design system beyond XD. Therefore, allowing even non-stakeholders to jump aboard from their devices and become a part of the latest versions of the design.

What else is there?

Along with this exciting news, Adobe shared more insight on what updates they’ve already developed and they are currently working on. Since the last major update last year which allowed adding voice triggers, i.e. voice prototyping – the process of creating prototypes for digital products activated by voice, Adobe is making the community happy with:

Adobe has also worked a lot on developing a strong design system, again based on the community’s feedback. Back in May 2019, Adobe released the feature allowing designers to build a design system with the help of components, linked assets, and cloud documents. Now, Adobe is investing in design systems even more and plans to enrich Adobe XD with a bigger range of asset types, improved tools in the asset panel, support for style guides, cloud document APIs, more control over versioning, updating, sharing permissions and even more features.

With all the powerful capabilities and regular updates, Adobe raises the bar high for complex software providing easy and intuitive working processes for design teams. The ultimate goal of Adobe is to create a full solution for prototyping and collaboration which completely matches the needs designers. We are eager to see what awaits!