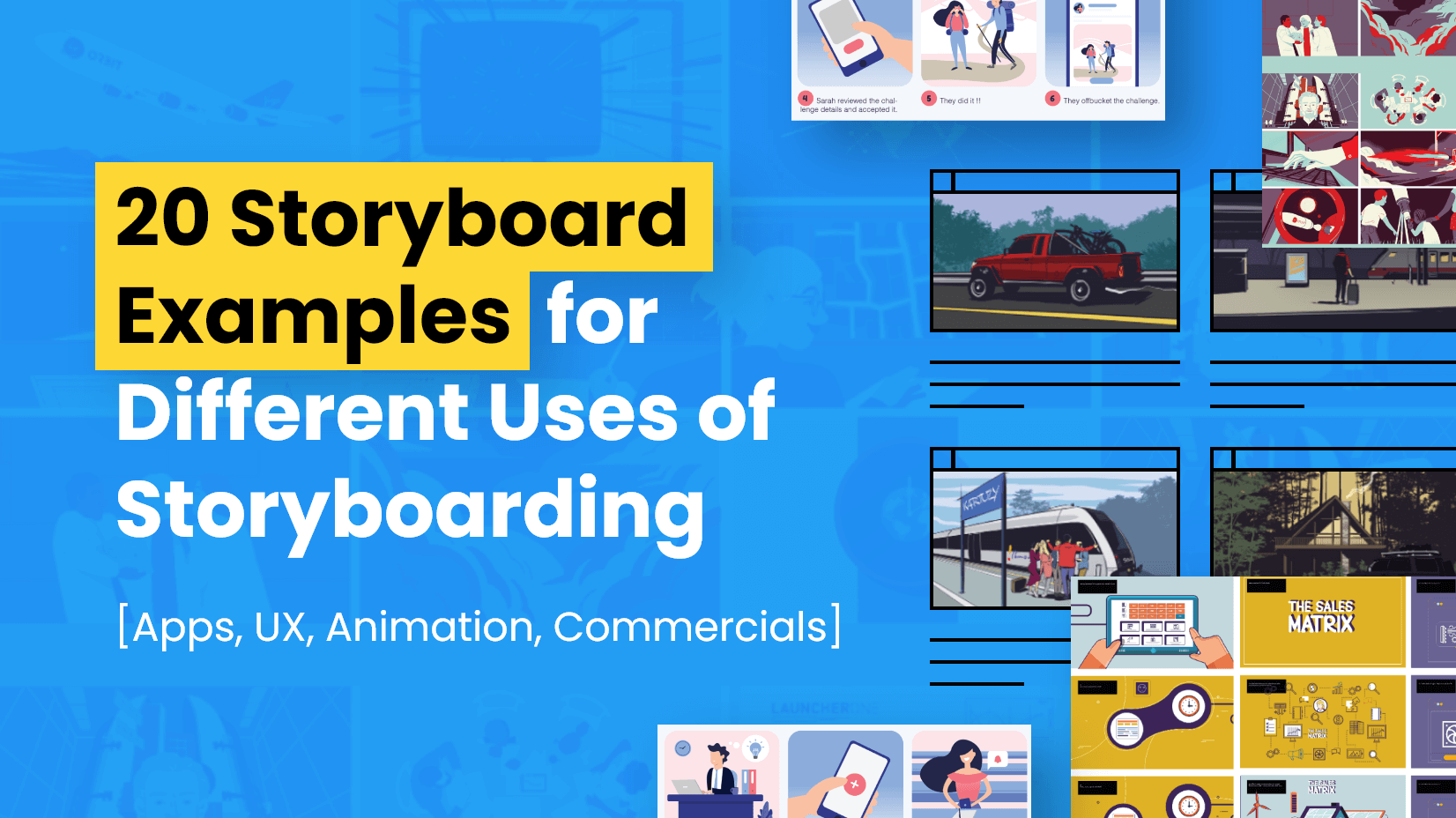 In our previous article, we explored the concept of storyboards, why you need one, how to make it, and of course, added some amazing examples to visualize the theory. Today we’ll go a step further and handpick 20 amazing storyboard examples for your inspiration. You’ll be able to see how a rough sketch translates into the final product and it’s going to be awesome. With this in mind, let’s jump right into it and see what the talented creators are up to again.

The first project is related to Virgin Orbit’s LauncherOne system that aims to connect rural communities to monitor global climate change. In short, the company within a company plans to provide launch services for small satellites. Clémence Thune is the art director and illustrator for the concept video and we can see how beautifully crafted illustrations transition into a well-planned final video. 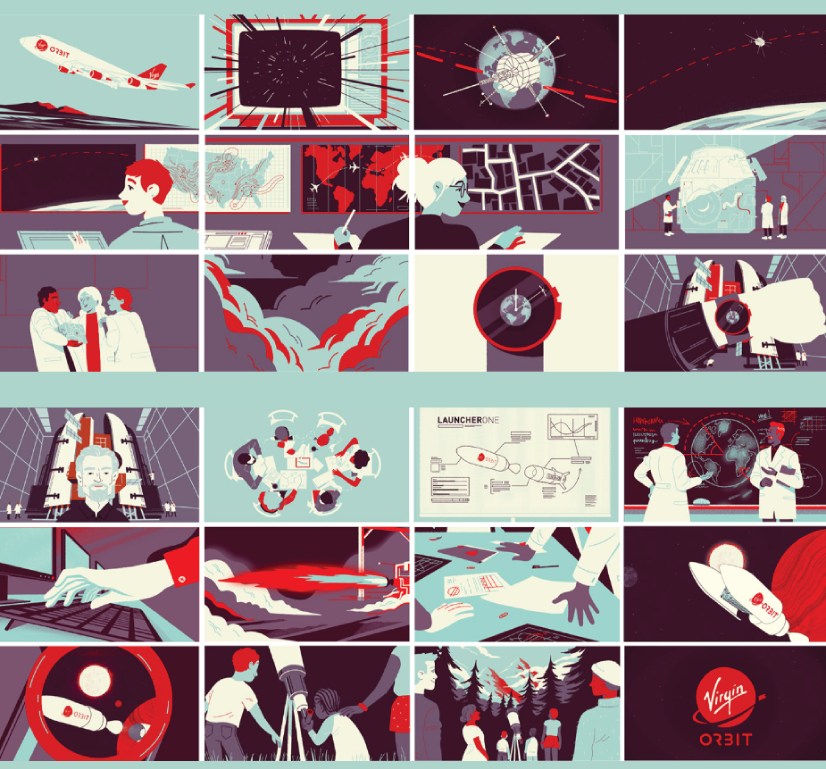 Bat Nan is a 2D animated short film by DeeDee animation studio as part of the project She-Kings that has 6 short films and one live-action movie in total.  Below, the storyboard features an entire fighting scene made in amazing details by the 2D animator and character designer Huy Hoang Ha. Most of the thumbnails make it into the final product and look mesmerizing. 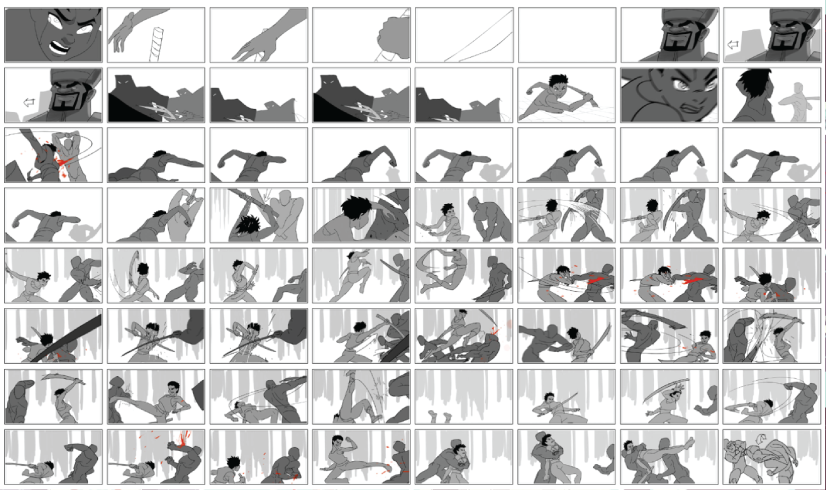 The next concept is a campaign aiming to engage the adult audience and spread awareness of how serious burns victims need care as fast as possible. This highlights the first 6 hours as the most important in saving the lives of burn victims. The series collaborate with AHL MASR, the 1st hospital of its kind in Egypt, the Middle East, and Africa that offers free treatment to trauma and burn victims. Many artists have worked on the vision to create a campaign and emotionally engaging video series.

For example, here we can see the storyboards from the copy that is telling the story of a father who forgets to turn off the heather and falls asleep. Unfortunately, the apartment catches on fire and endangers the life of his son. Even the rough sketches from the storyboard hold pretty strong emotions from the very start. 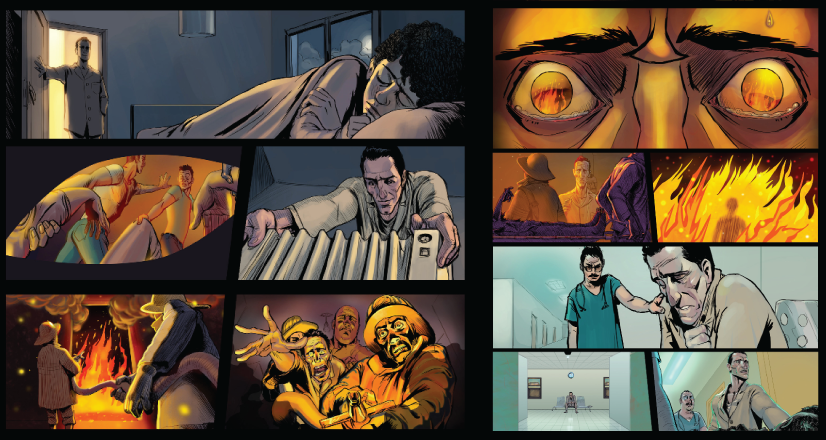 The creator Dinos&Teacups has a very rich gallery of storyboards and entire concepts for explainer videos. However, this one we enjoyed the most so we instantly handpicked it as a great storyboard example. Unlike most of the examples, the sketches here aren’t that detailed and painted and they don’t need to be. Consequently, despite their simplicity, the panels are clear in what they want to indicate and accurately translate into the final video, as you can see in the gifs.

The project itself, AZA (A-Z Atlas) is a concept for a two-way matching system for sellers and buyers.

Meanwhile, Salon Life is an app for beauty salon owners to focus on generating more repeat business and saving time with their daily routine. Benoit Drigny is the illustrator, thanks to whom we have this exemplary storyboard that later translates into illustrations and still frames before making it to the final trailer video. 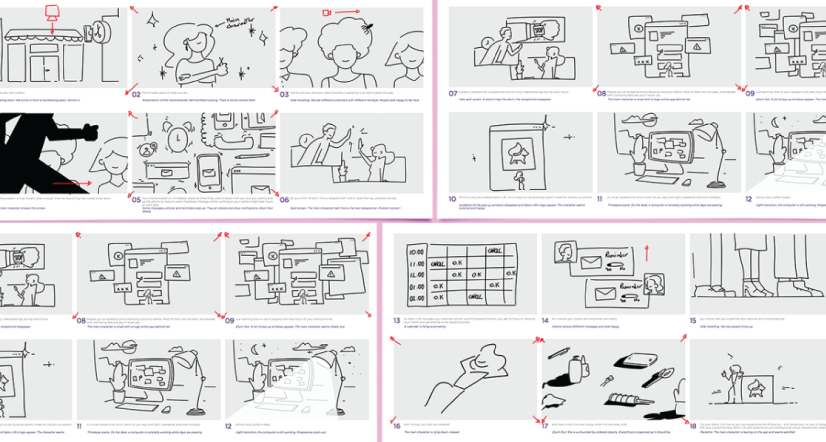 The author explains Chateau Noir as the transposition of a fairy tale and a metaphor for something else: an intense quest accompanied by fear, joy, death, and the unknown. Indeed, the still shots form this journey and tell a story within a dream. 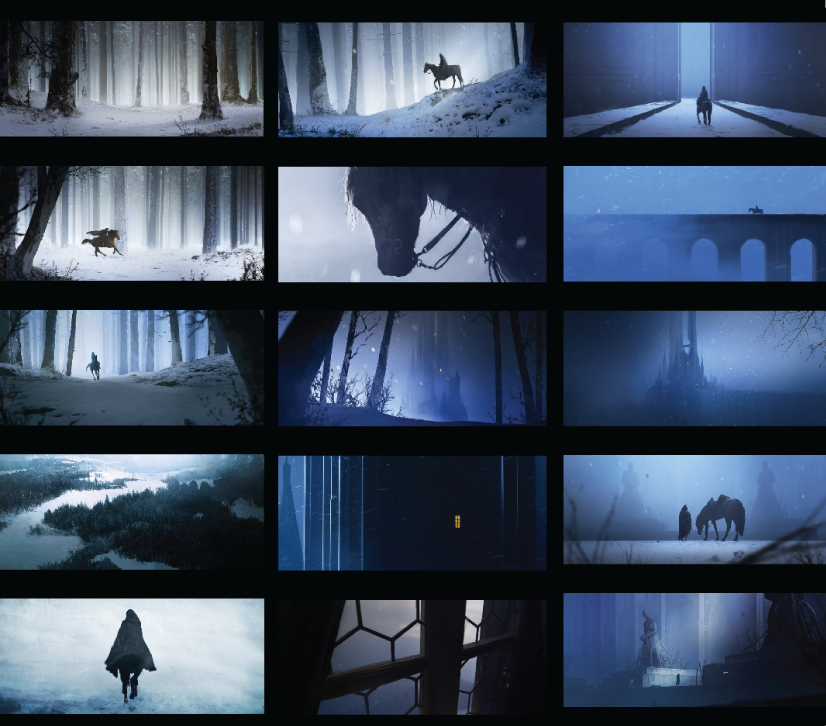 Unfortunately, as much as we want to see the final video and enjoy the beautiful story, the project hasn’t be completed yet. All we currently have is this atmospheric teaser.

7. Story In Picture Storyboard Example: Little Things We Can’t Do During a Quarantine

Next, this a personal project of the illustrator and picture book maker Marc Majewski who had found a way to give color to his daily routine during the quarantine through a series of illustrations. The pictures tell the story of little things we all love doing but can’t do during a quarantine. On a positive note, these are also the things we will all enjoy doing once it’s all over. 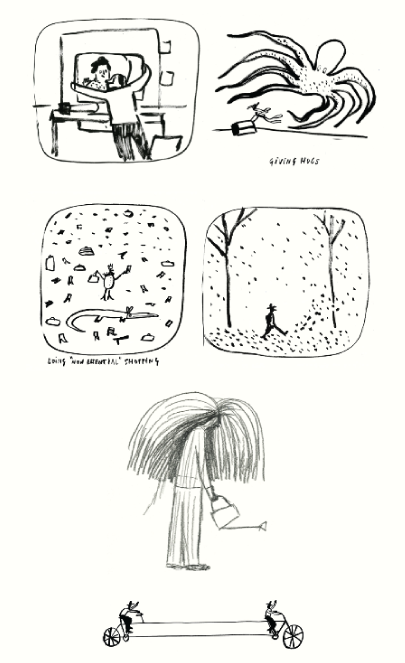 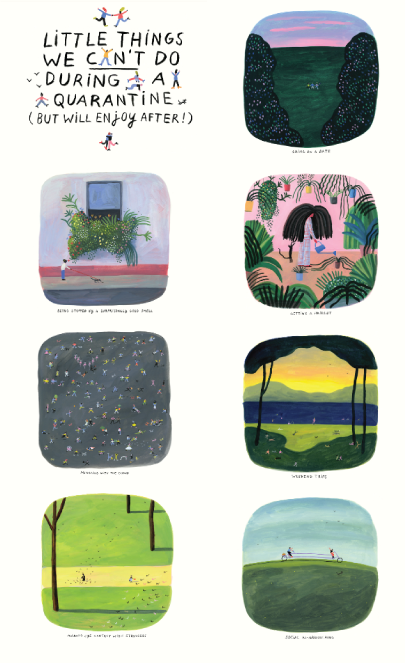 Adonis Alcici created around 100 scenes for the entire storyboard for the Porsche Taycan Launch (Brazil) commercial you’ll see below. 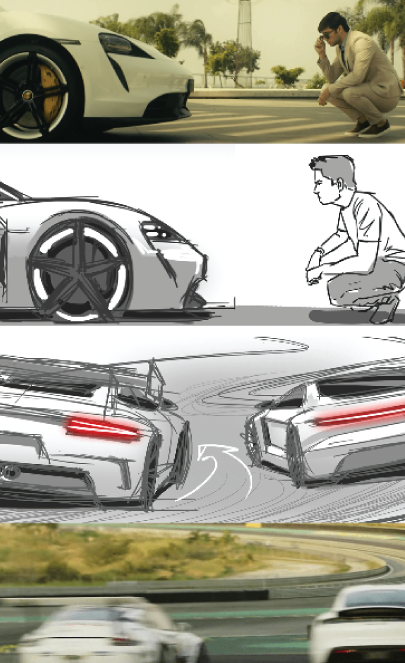 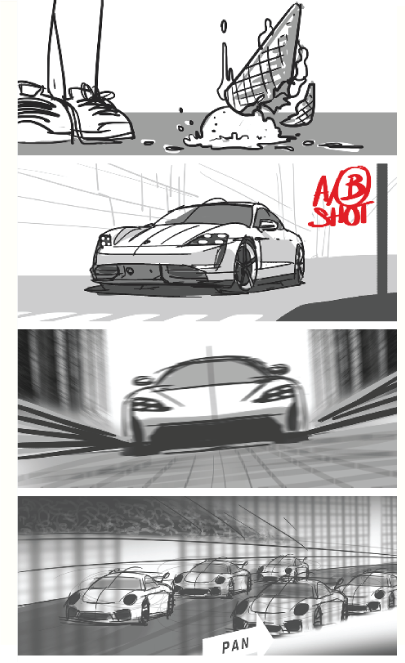 The illustrator has shared some of the sequence artworks that made it to the commercial, and he also compares them to the final still shots. A perfect example of the creation of a commercial with the use of storyboarding in pre-production.

Another example of app-video planning comes from the Ukrainian concept artist GARRA with his thumbnail storyboard. Interconnect is an app that helps you find a route from point A to point B and set a departure and arrival date and time. As a result, the final video shows the stories of friends always find a way to each other as time and distance don’t really matter. 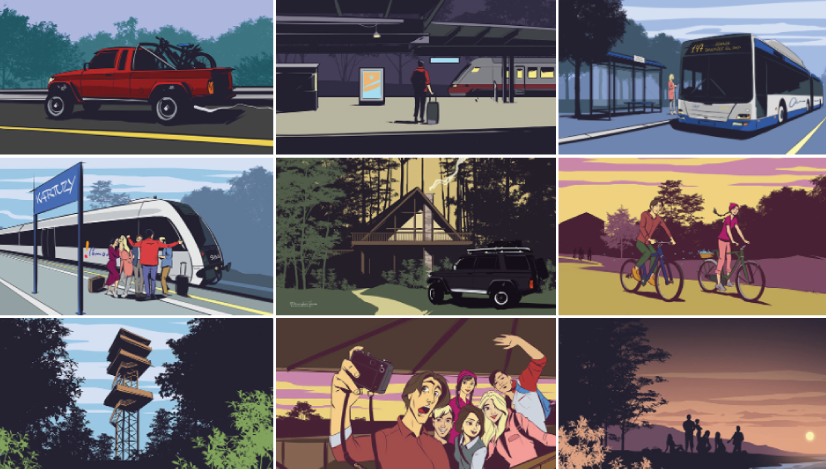 App Illustration by G A R R A

Red Bull is famous for its fun highly-visual commercials that tell stories without dialogues. In this case, we have a short announcement film for the Red Bull Music Academy festival from September 2016, Paris. Bruno Mangyoku creates the storyboards, script, and overall design and direction of the movie.

Fold: The Begining is a short movie that shows the creation of the world according to Norse Mythology. Gosia Tekieniewska created this art video as a complementary part of a Master’s Diploma project in the style of moving illustration. Moreover, she also shares that during the making of the storyboard for the film, she treated each keyframe as a book spread. 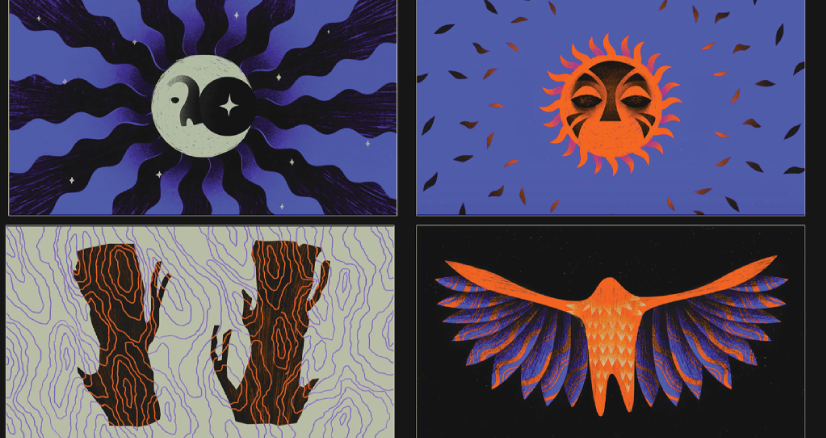 Fold- The Beginning by Gosia Tekieniewska

Some storyboards consist of photos instead of drawings. In this case, with the Barilla pasta commercial for TV in Italy, the photographer Simone Bramante and the illustrator Cinzia Bolognesi face the challenge to create a short story about organic pasta and tomato sauce. 10 seconds of pure appetite- boosting bliss. 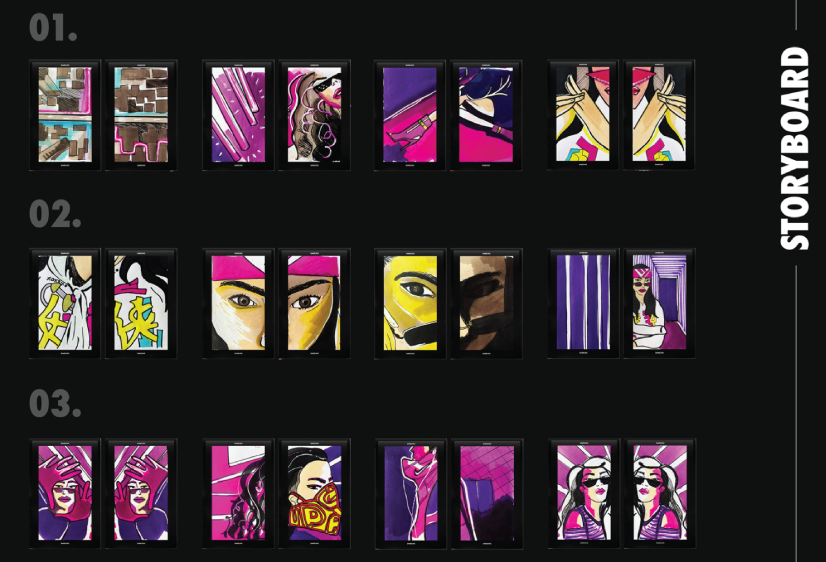 Also, we see how sketches and drawing on storyboards plan the exact photoshoots for a commercial, shot by shot. In fact, they predict the sequence, composition, and even color schemes. The Nike Vapormask project was planned and executed by Laura Martinez and Giulia Tornello. The two creators also feature inspirational mood boards fr the neon colors and overall vibe of the commercial.

Pizza Hut promotional comic books have been around for decades. In the same way, this cool project by Léo Chiola and James Swift is a nice throwback with a more modern looking style. 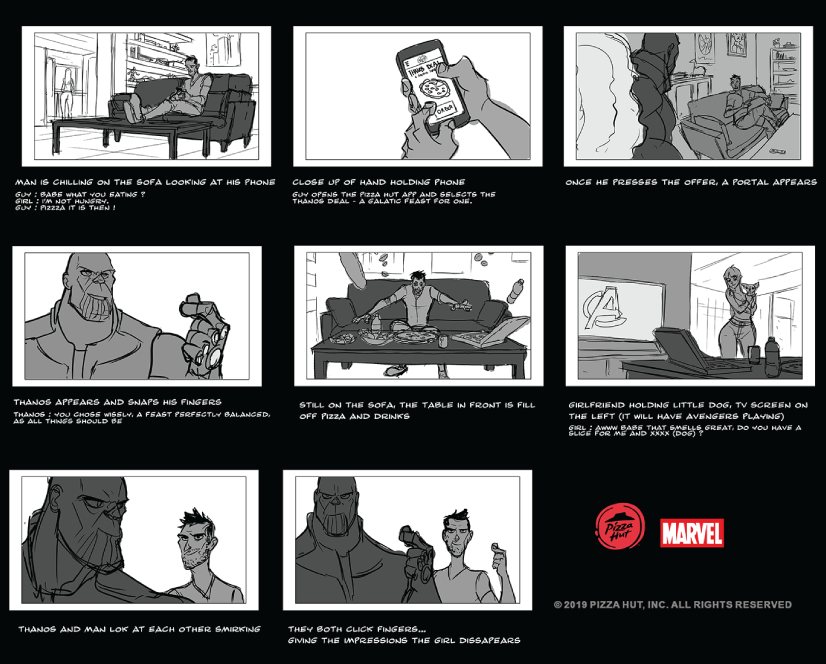 Explanation videos are really hard to make as they need to compress huge amounts of data and present it in a short and in an interesting and visually-appealing way. Therefore, the next example is an infographic video that explains a sales Matrix concept through motion graphics animation. The Explainer Geeks offer their storyboard essential for the final video. 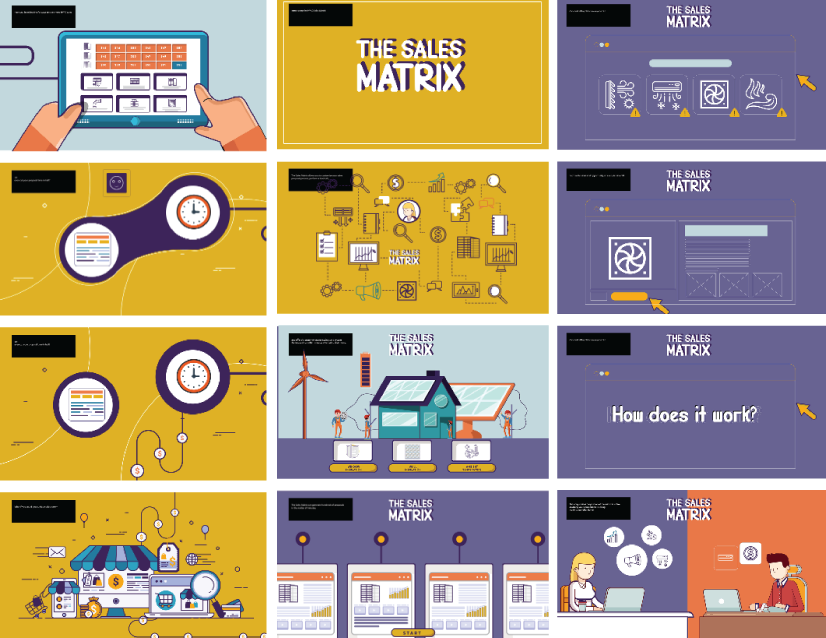 This storyboard design isn’t for a specific project, but it shows the beauty and creativity that the pre-production process offers. It’s a well-crafted story in detail with atmosphere, motion, lots of emotion, and depth and it can become everything from a comic book to a short movie. In other words, it’s an idea by Vipul Mali that he wants to share with the world.

Detained is a 3D animation project that the author Orfenn Schuller shares via a very detailed storyboard frame by frame. Also, when we scroll through the panels, it feels as if we’re watching the entire scene animated. 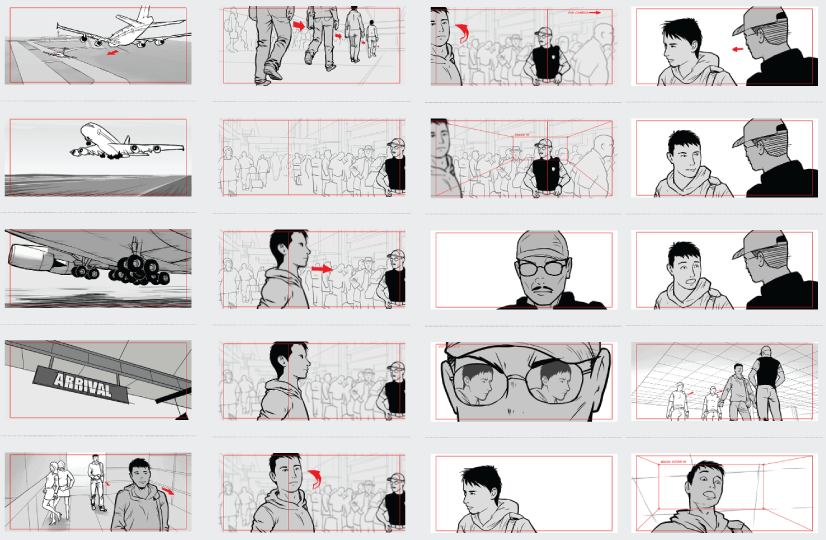 In this example, we also see the focus of each frame alongside the motions of the camera, indicated by red arrows. 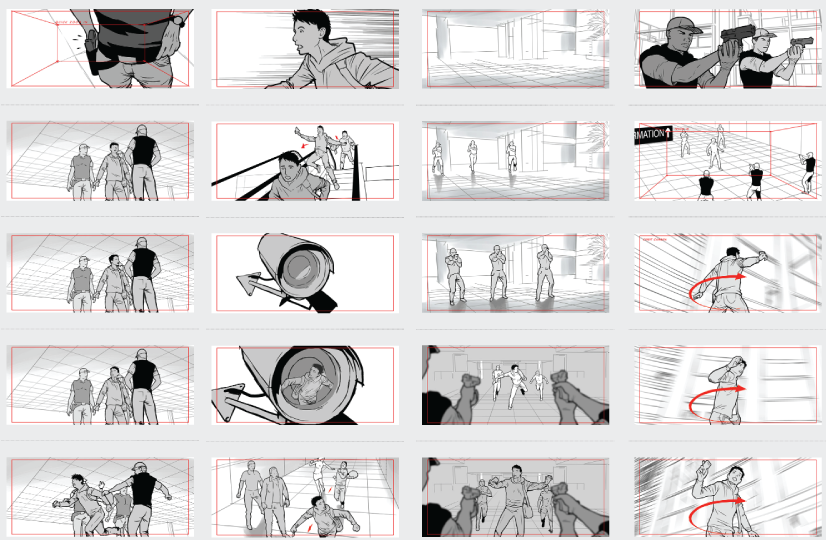 The Off Bucket app project by Sara Eldebissy offers users personas, user stories, key user flows, and wireframes, but we’ll focus on the UX storyboard as it’s a good example of how you can explain user interaction with a certain product. Therefore, the panels follow the character who gets an idea for a challenge and adds his friends, who accept and do the challenge. 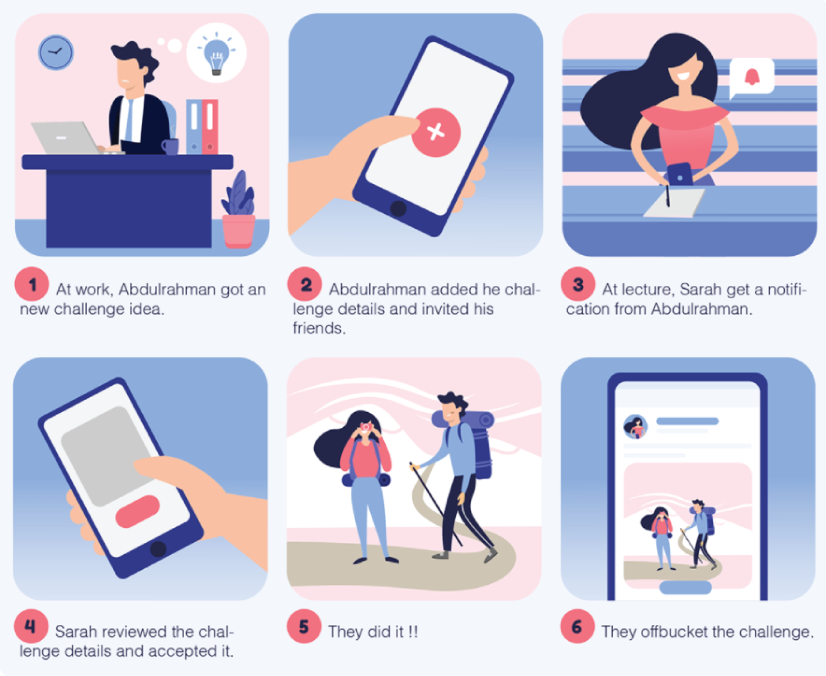 These detailed illustrated panels spread through a storyboard dedicated to an episode from tv-series for a channel MBC TV. In addition, the studio Xpanse CGI works with Warner brothers, Dark Horse, and Microsoft. 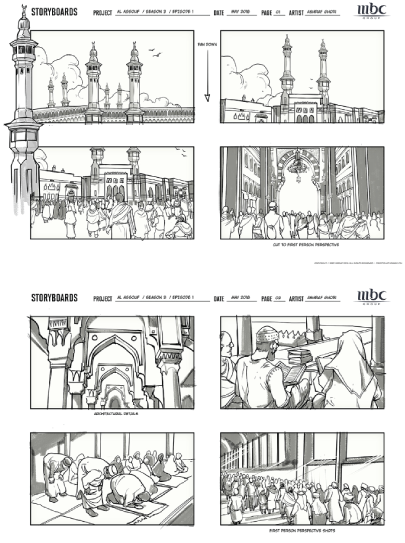 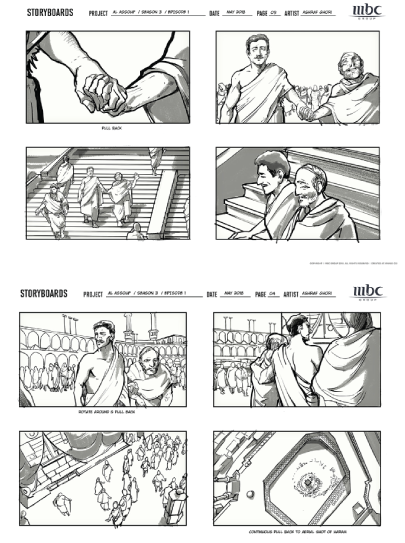 Last, a very creative concept for a hair product commercial by Nikki Wong. The panels reveal the story of two characters that try to steal a bag of gold, however, they meet a gang of thieves and have to use their secret weapon to prevail: hair. Of course, the commercial makes sure to reveal the reason behind the character’s strong hair in the end. 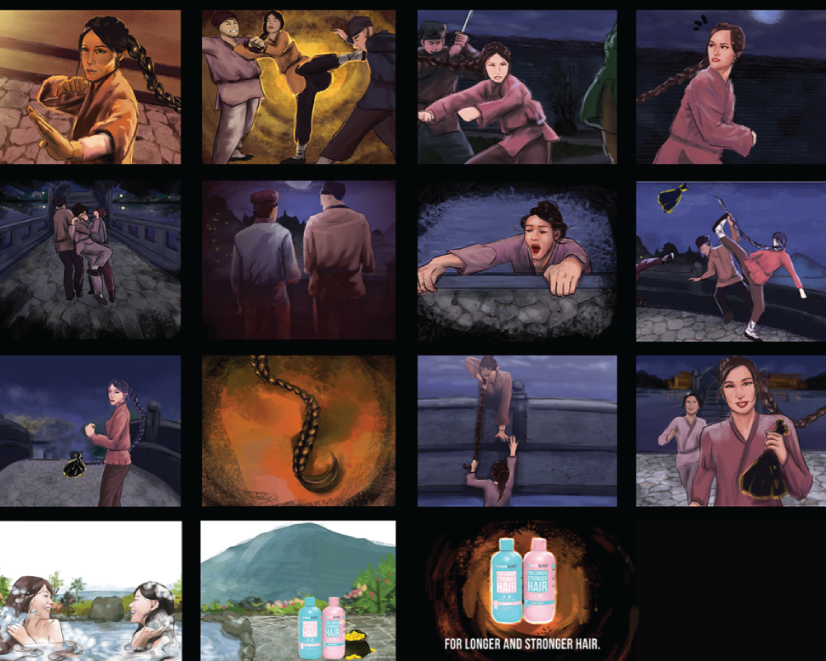 In conclusion, we hope you enjoyed our handpicked storyboard examples and all the different uses of storyboarding. If you feel inspired, don’t hesitate to grab a pen and paper or open your favorite storyboard tool and start planning your next project. 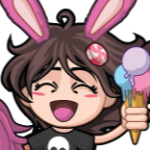 Add some character to your visuals with our cartoon character sets (100+ poses each):