Win an Oscar for art? Mission possible for the team of Spider-Verse [Interview] 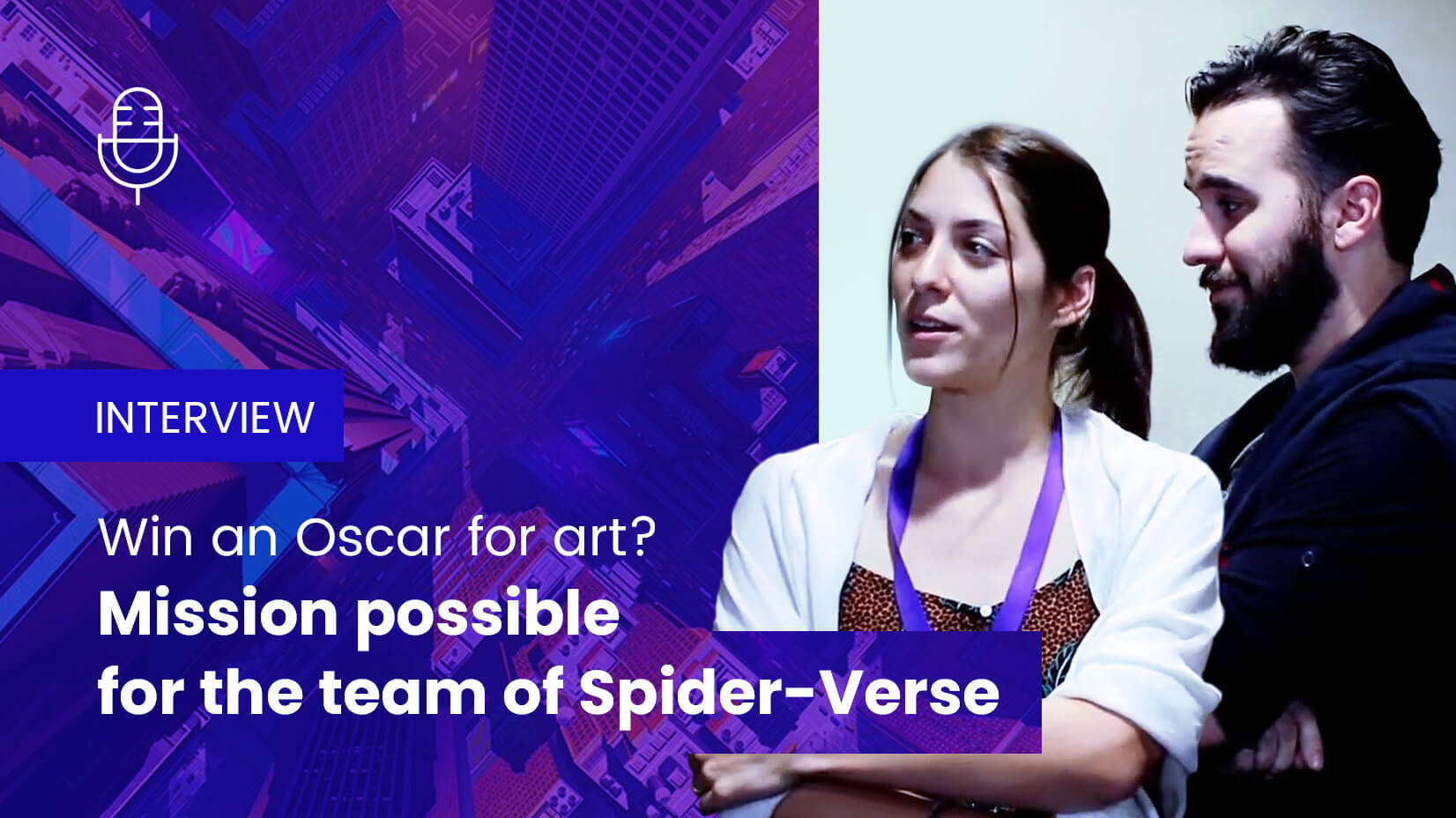 Ever wondered what is the feeling to win an Oscar for the art you’ve made? Well, today we will introduce to you two amazing conceptual artists who have experienced this once-in-a-lifetime adventure – Jessica Rossier and Bastien Grivet. The Oscar-winning duo has worked behind the ultra-popular and successful production Spider-Man: Into the Spider-Verse which premiered in December 2018.  Read on to learn what Jessica and Bastien shared with us about their experience and some quite interesting facts about the movie.

Who are Jessica and Bastien?

Jessica Rossier and Bastien Grivet are conceptual artists at Wardenlight studio located in Montpellier, France. The creative studio specializes in conceptual art and visual development in different artistic directions of the entertainment industry – video games, animation movies. The studio also takes up projects for advertising and more. Jessica and Bastien are co-founders of the studio and usually work together on projects.

Let’s Go with the ARTerview!

At Futuro 5, we had the opportunity to ask Jessica and Bastien several questions about their journey as conceptual artists. Their struggles, as well (because everybody experiences that), spicy stories behind the making of Spider-verse, and of course, useful advice to young artists who dream of a career in digital art. It was a real pleasure for us meeting these amazing, positive, and inspiring artists, so we are sure you will love them, as well. Check out the video interview or read it in a text form below.

What were your biggest challenges when you started your studio?

Bastien: Maybe to find clients… it’s always the case. But we were working enough to have a lot of personal artwork already published on art stations or different platforms. So, the clients started to come. And years after years, there were more and more of them. Since then, this was not a problem anymore.

Jessica: I think the challenge was the paperwork. Because when you start a company, this has always been the sh***y part – the paperwork. And we had to understand how it works.

Do you have any difficulties working as a team, e.g. having different visions about a project?

J: We are more complementary than different. Because we started working together way before we created the company. So, we used to work together.

B: But sometimes, there are some fights, of course.

J: Yes but not for professional work. For example, we used to work together on the same project because we had the same ideas. We had a client briefing by Graphic Bible, so we just had to follow it. But when we create something for us, it’s completely different. Nobody is trying to interfere in each other’s work.

B: But we do it anyway. So, sometimes it is like fighting and fighting and after that, it’s like: Ok, you are right. She is always right.

What is the feeling of being involved in such a production as Spiderman?

J: A huge adventure. It was totally new for us. We learned a lot, we shared a lot with colleagues artists who worked on the production, too. Our art director for the production was just amazing.

B: Wow, overwhelming. We feel so grateful. It was a challenge but it was maybe one of the best challenges of our career by far. It’s just crazy!

You said you’ve worked with other people on the production. How did your team collaborate with others?

J: Everyone was spread around the world and most of the artists were freelancers. We couldn’t be in the same place but…

B: …it worked well – with emails, video conferences and mostly, video feedbacks. Everything worked just smoothly. It was perfect.

And did you expect that the movie would win an Oscar?

J: It was a huge surprise. We knew it was something crazy about the graphic style, the story, as well. But winning the Oscar? No

B: We knew it would be different. We knew it would be something really crazy. But you know, when it’s crazy, you are like: Okay, it’s going to please maybe a few friends artists but what my mom is gonna think? But yeah… We won the first prize, and then another, and another… and holy sh**!

J: It actually worked! They actually loved the movie, the story. But the graphic part was really important to us because we put our heart on it.

And did this event change anything in your lives? Did it open new doors for you?

Both: Everything! It changed everything!

J: So much, you have no idea! This is a part of our lecture, actually – to explain what we gained and how much it’s changed things for us.

B: We used all the techniques on the production. We started to work with some other clients we were never going to work with. Yeah, it changed everything. And now, we are here in Varna with all friends and it’s so good to share it with so amazing people. And around the world, we are able to speak out that. It is always a great adventure.

And what is your advice to young artists?

Spider-Man: Into the Spider-Verse

The movie is released in December 2018 but the work on the production starts in 2015. The directors of the project are Bob Persichetti, Peter Ramsey, and Rodney Rothman. Their idea is to create an animation which combines versions of SpiderMan from different universes. The production is huge because the directors’ vision is to create an innovative animation which resembles comics but made with modern technology and 3D opportunity which turned out to be quite a challenge. Over 180 animators were needed for the realization of the project.

When the movie came out in the cinemas, the hard work on the production paid off. The audience’s response was great, and the fans were truly impressed. This made Spider-Man: Into the Spider-Verse the most profitable movie of Sony Pictures Animation in USA. Then, the awards follow – the movie wins 65 awards, among which and Oscar in the category Best Animated Feature Film, Golden Globes Award in category Best Motion Picture – Animated, BAFTA Awards – Best Animated Featured Film.

Interesting facts about the movie:

Watch the trailer    View on IMDb